Obama Tied to Another Activist in FBI Terror Probe

President Obama has ties to yet another Chicago activist whose home was raided last week by the FBI as part of a terrorism probe, WND has learned.

Last Friday, as part of an investigation into material support for terrorist organizations, the FBI raided eight homes, including that of Chicago anti-war activist Joseph Iosbaker and his wife Stephanie Weiner.

In 1998 the duo worked as leaders of the Chicago New Party, a controversial 1990s political party that sought to elect members to public office with the aim of moving the Democratic Party far leftward to ultimately form a new political party with a socialist agenda.

As WND reported yesterday, another activist whose home was raided by the FBI was Hatem Abudayyeh, the executive director of the Arab American Action Network, or AAAN. 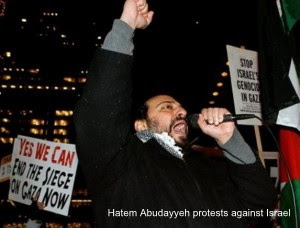 Obama, while serving as a paid director of the far-left nonprofit, the Chicago Woods Fund, provided two grants to the AAAN, which was founded by a longtime Obama associate, Columbia University Professor Rashid Khalidi. Khalidi's wife, Mona, is president of the AAAN. Obama served at the Woods Fund alongside Weather Underground terrorist-group founder Bill Ayers.

Iosbaker, meanwhile works at the University of Illinois at Chicago and is a local chapter leader of the Service Employees International Union, or SEIU, whose former president, Andy Stern, was listed as the most frequent visitor to the White House.

Iosbaker and his wife were Chicago leaders of the socialist New Party.

The pair held a news conference, along with several Chicago "peace" organizations, claiming their home was raided because of their activism against war in Iraq and Afghanistan.

When asked why they thought they were targeted, Isobaker's wife, Weiner, said "I came from a family that marched against the Vietnam War. I'm proud that my children, as well, are organized."

Marxist activist Carl Davidson, a founder of the New Party, recalled in a WND interview Obama's participation with his party.

"A subcommittee met with [Obama] to interview him to see if his stand on the living wage and similar reforms was the same as ours," stated Davidson.

"We determined that our views on these overlapped, and we could endorse his campaign in the Democratic Party," Davidson said.

Davidson remembers Obama attending a New Party meeting to thank attendees for voting for him.

Using qualifying language, Davidson said that to his knowledge Obama was not a member of the New Party "in any practical way."

Becoming a New Party member requires some effort on behalf of the politician. Candidates must be approved by the party's political committee and, once approved, must sign a contract requiring they will have a "visible and active relationship" with the party.

Asked whether Obama signed the New Party contract, Davidson replied there was "no need for him to do so."

"At the end of our session with him, we simply affirmed there was no need to do so, because on all the key points, the stand of his campaign and the New Party reform planks were practically the same," Davidson told WND.

Among the New Party's stated objectives were "full employment, a shorter work week, and a guaranteed minimum income for all adults; a universal 'social wage' to include such basic benefits as health care, child care, vacation time and lifelong access to education and training; a systematic phase-in of comparable worth and like programs to ensure gender equity."

The New Party stated it also sought "the democratization of our banking and financial system – including popular election of those charged with public stewardship of our banking system, worker-owner control over their pension assets [and] community-controlled alternative financial institutions."

Many of the New Party's founding members were Democratic Socialists of America leaders and members of Committees of Correspondence, a breakaway of the Communist Party USA.

Obama attended several DSA events and meetings, including a DSA-sponsored town hall meeting Feb. 25, 1996, entitled "Employment and Survival in Urban America." He sought and received an endorsement from the DSA.

While running for the Illinois state Senate in 1996 as a Democrat, Obama actively sought and received the endorsement of the New Party, according to confirmed reports during last year's presidential campaign.

The New Party worked alongside the Association of Community Organizations for Reform Now, or ACORN. The New Party's aim was to help elect politicians who espoused its policies.

Obama's presidential campaign in 2008 denied he was ever an actual member of the New Party.

But print copies of the New Party News, the party's official newspaper, show Obama posing with New Party leaders, listing him as a New Party member and publishing quotes from him as a member.

The newspaper lists other politicians it endorsed who were not members but specifies Obama as a New Party member.

New Ground, the newsletter of Chicago's Democratic Socialists of America, reported in its July/August 1996 edition that Obama attended a New Party membership meeting April 11, 1996, in which he expressed his gratitude for the group's support and "encouraged NPers (New Party members) to join in his task forces on voter education and voter registration."

The New Party, established in 1992, took advantage of what was known as electoral "fusion," which enabled candidates to run on two tickets simultaneously, attracting voters from both parties. But the New Party went defunct in 1998, one year after fusion was halted by the Supreme Court.

According to DSA documents, the New Party worked with ACORN to promote its candidates. ACORN, convicted in massive, nationwide voter fraud cases, has been a point of controversy for Obama over his ties to the group.

In 1995, the DSA's New Ground newsletter stated, "In Chicago, the New Party's biggest asset and biggest liability is ACORN.

"Like most organizations, ACORN is a mixed bag," the newsletter said. "On one hand, in Chicago, ACORN is a group that attempts to organize some of the most depressed communities in the city. Chicago organizers for ACORN and organizers for SEIU Local 880 have been given modest monthly recruitment quotas for new New Party members. On the other hand, like most groups that depend on canvassing for fundraising, it's easy enough to find burned out and disgruntled former employees. And ACORN has not had the reputation for being interested in coalition politics – until recently and, happily, not just within the New Party."