“The Muslim world is going through an unprecedented difficult and trying time,” said the Secretary General of the 56-state Organization of the Islamic Conference, Ekmeleddin Ihsanoglu, on Friday.

One might reasonably have thought that he was referring to the recent increase in violent jihad incidents in the West, perpetrated by Muslims who explained and justified their actions by reference to Islamic texts and teachings. But no, Ihsanoglu was exercised about “Islamophobia,” the invented term Islamic supremacists use to try to stifle realistic analysis of the global jihad in all its manifestations.

“We are facing daunting challenges and severe hardships,” Ihsanoglu complained. “Islam and Muslims are under serious attack, and Islamophobia is growing and becoming more rampant and dangerous by the day.”

It is not at all established that “Islamophobia” really is growing. In fact, the FBI has recently released data establishing that hate crimes against Muslims are comparatively rare. But if there is any actual suspicion of or negative feelings toward Muslims in the United States, it is solely and wholly the responsibility of Nidal Hasan, the Fort Hood jihadist; Umar Farouk Abdulmutallab, the Christmas underwear jihadist; Abdulhakim Mujahid Muhammad, who killed one soldier and murdered another in a jihad shooting outside a military recruiting station in Little Rock, Ark.; Faisal Shahzad, the Times Square jihadist; Khaled Sheikh Mohammed and Osama bin Laden on 9/11; the London jihad bombers of July 7, 2005; and so many others. 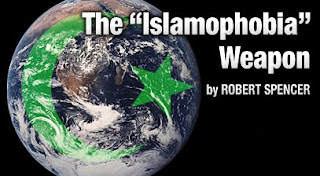 Yet Ihsanoglu, with an evasion of responsibility that is characteristic of Islamic supremacists, pretends that non-Muslims are growing more suspicious of Muslims and Islam not because of this, but because of some gratuitous bigotry. This is a tried and tested tactic, designed precisely to divert attention from Islamic jihad attacks and to shame and discredit those who would dare stand up to jihad (both violent and stealth) and Islamic supremacism in the West.

Without any reference to the pandemic of jihad violence either in the U.S. or worldwide, Ihsanoglu referred instead to a “pandemic of Islam vilification” in the U.S. and Europe, and declared:

“We need an all inclusive effort of OIC member states to stem this menace. That is why I firmly believe that this question of Islamophobia should figure prominently on the agenda of all OIC member states whenever they deal with their Western counterparts.”

What Ihsanoglu and the OIC want Western states to do is limit the freedom of speech regarding Islam and jihad. In 2008 he issued a dictatorial warning: “We sent a clear message to the West regarding the red lines that should not be crossed” regarding free speech about Islam and terrorism. And he reported success:

“The official West and its public opinion are all now well-aware of the sensitivities of these issues. They have also started to look seriously into the question of freedom of expression from the perspective of its inherent responsibility, which should not be overlooked.”

Since then he has encountered success beyond his wildest dreams, for the Obama Administration has extended and broadened the Bush policy of refraining from speaking about Islam and jihad in connection with acts of Islamic jihad terrorism. The absurdity of this policy reached its apex with the official report on the Fort Hood massacre, which blithely ignored Nidal Hasan’s clear, public, and repeated adherence to Islamic jihad doctrine, his cries of “Allahu akbar” as he committed his murders, and his passing out of Korans on the morning of his massacre.

Ihsanoglu is coming to Chicago for a conference with leaders of Hamas-linked groups such as the Council on American-Islamic Relations (CAIR) and the Islamic Society of North America (ISNA). The mainstream media will almost certainly overlook the principal importance of the conference, and its anti-free speech agenda, and will report uncritically about the rise in “Islamophobia” and the fears among Muslims of a “backlash.” There will be no discussion at this conference of how to prevent or even limit the spread of the jihad ideology among Muslims — in other words, there will be no attempt to attack the actual causes of “Islamophobia.”

In less Orwellian times, that would be revealing enough for anyone to see how the Organization of the Islamic Conference and its allies are using charges of “Islamophobia” as a weapon to advance the jihad no less unmistakably than Osama bin Laden did on September 11, 2001.