Despite Turmoil, Succoth Is Celebrated at Joseph's Tomb

The peace-process in Israel is on volatile ground as usual. A troubled peace-process is one of those things we can count on, like the daily rotation of the earth and the high fat content of doughnuts. The moratorium on settlement-building ended Sunday, and settler West Bank construction resumed, causing a bit of consternation. The Palestinians have threatened to abandon the talks if construction isn't put to a halt once again. But that's not all.

On Tuesday, Israeli Foreign Minister Avigdor Liberman told the United Nations General Assembly that Israel shouldn't even try to negotiate a peace deal this year, contrary to Prime Minister Benjamin Netanyahu's commitment to push ahead with peace talks. Liberman's comments caused the Palestinian delegation to walk out, and the Prime Minister's office disavowed what its own Foreign Minister said. The United States sent White House envoy George Mitchell to meet with Netanyahu on Wednesday and Palestinian President Mahmoud Abbas on Thursday to try and keep the precarious situation from falling to pieces. 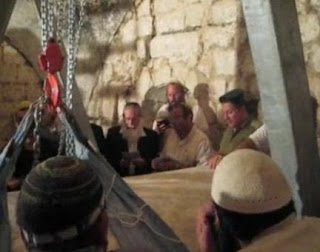 In the meanwhile, however, in the town of Shechem (Nablus), over 1000 Jews celebrated Succoth at Joseph's Tomb after an intense night of renovation. Joseph the son of Jacob is said to have been buried at that location in Shechem after his remains were brought up out of Egypt, and it is one of the holiest sites in Judaism. Tradition around the tomb is old, going back to the 4th century AD, and archeological excavations starting in 1913 unearthed Egyptian artifacts that dated to 1600-1400 BC.

Israel regained access to Joseph's Tomb during the Six-Day-War in 1967, and maintained it for decades, even after Nablus was returned to the Palestinians in 1995. In October of 2000, though, six Palestinians and one Israeli were killed fighting over the site, and the Israeli army withdrew, expecting the Palestinian Police to guard the tomb as agreed. Instead, as soon as the Army was gone, a Palestinian mob attacked the site and burned books, reading stands and the army outpost that had been built there. Although the Palestinians said they would fix the tomb, they painted its dome the green of Islam.

After years of neglect and abuse, during which the site was used to dump garbage and was occasionally set on fire, a group of Knesset members in early 2008 wrote a letter asking the Prime Minister to have the tomb renovated: "The tombstone is completely shattered, and the holy site is desecrated in an appalling manner, the likes of which we have not seen in Israel or anywhere else in the world," they wrote. In response to the Israelis' request, the Palestinians vandalized the tomb and once again set it on fire.

This weekend, the tomb was restored overnight during an intense effort that started on Saturday night and ended on Sunday morning - in time for Succoth celebrations. Over 1000 people arrived to pray and express their excitement over the long-awaited renovation, and tears filled the eyes of many as the book of Psalms was read.

Shomron Regional Council Mayor Gershon Mesika spoke during the celebration. "This is a symbolic closure, an exciting historic moment, a tiny repair in the shame of the abandonment of Joseph's Tomb," said Mesika. "We thank the officers and soldiers for their partnership in the progressive renovation of the tomb. However, the joy is not complete at all...No nation in the world would allow a sacred place, so symbolic to its people to be so disgraced as Joseph's Tomb. I urge the Israeli government to make amends and allow the Jewish stay at Joseph's Tomb, which was anchored even in the Oslo Accords, in which it was determined that Joseph's Tomb will remain under full Israeli control."