About four years ago, I wrote a column about the United Nations called “Prozac and Extra-Thick Tin Foil Hats.” In it, I noted that “vague sense of unease one gets when one realizes he has just struck up a conversation with a stranger whose elevator doesn't go all the way to the top floor.”

At first, everything seems ok, but then, as it dawns on you the person you are talking to isn't completely in touch with reality, the hairs stand up on the back of your neck a little.

You wonder just how nuts the person is . . . will they suddenly start shouting in your face, maybe even turn violent? It's usually just a fleeting feeling, but it is disconcerting, to say the least.

I've been getting that same feeling of late as I analyze current events . . . a vague, discomfiting sense that everybody is on Prozac but me, and I am bumping into them just as their meds are starting to wear off.

The majority of the emails received were from people on Prozac claiming the piece was offensive to people on Prozac. Several others emailed me to chew me out for being insensitive to mental illness.

I guess I am guilty as charged - I honestly didn’t consider the feelings of the mentally ill when I was writing the piece about the UN. . . but I was writing about the UN! And forgive me for stating the obvious, but mental illness is not something one wants to see reflected in international diplomacy.

Nonetheless, the reaction really did surprise me. I wouldn’t necessarily do anything differently today, but I never would have expected anybody to take offense at the image of UN diplomats wearing tinfoil hats as a metaphor.

Today, I would be less surprised. The art of taking offense has been honed and shaped and sharpened into a devastatingly effective weapon able to cut through the 1st Amendment’s defensive shield like a hot knife through butter.

The list of things one cannot say without giving offense is growing by the day, and as people begin to retreat from the truth in order to ‘get along’, more protected groups start to emerge and the retreat becomes a rout and eventually, a surrender.

If one says something offensive about Christians, they are bravely exercising their Constitutional right to free speech. And they can expect it to be fully honored. Christians won’t riot in the streets in response to seeing images of Christ immersed in urine being honored by the federal government as ‘art’.

Last year, a church in the US had Bibles printed in Afghanistan’s two most common languages and sent them to Afghanistan. The Bibles were confiscated by the US government ‘amid concern they would be used to try to convert Afghans’ (of course) and the Bibles were thrown away like trash and ultimately burned.

Yes. Burned. By the United States federal government. The US government burned the Bibles to prevent them from falling into the hands of ordinary Afghanis.

Not only were there no riots, it wasn’t even much of a news story. There was instead a brief story detailing how the military is working to prevent Christians from proselytizing.

"A soldier received unsolicited Bibles in Pashto and Dari that were donated by a church in the U.S.," Col. Gregory Julian, spokesman for U.S. Forces, Afghanistan, told CNN.

"The soldier was unaware that he was not allowed to distribute them, but the chaplain leading the Bible study later corrected the service member, although this does not appear on the footage we've seen.”

Then, this equally stunning disclaimer from the US military.

“The Bibles were never distributed. They were removed by the chaplains."

When the Florida pastor threatened to burn the Koran in response to the decision to build the Ground Zero Mosque, the worldwide rioting killed dozens – eleven men died in Pakistani rioting alone. The riots and deaths happened BEFORE the scheduled Koran-burning, which was eventually called off anyway.

A Crucifix immersed in urine is federally protected art - but the mere threat to burn a Koran prompted objections from the White House, the Pentagon and General David Petraeus, spawned deadly riots abroad, and death threats here at home.

While the Florida pastor backed down on his threat, a New Jersey Transit worker decided to mark the September 11th remembrance by tearing a few pages from a Koran which he tried to burn in front of the Ground Zero Mosque. 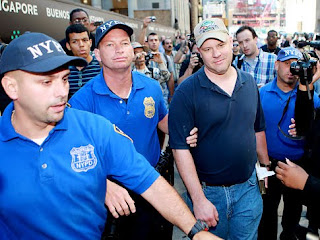 The transit worker, a man named Derek Fenton, was escorted away by New York City police. When Fenton reported for work on Monday, he was fired. For a legal, albeit controversial, protest that took place on his own time and in another state!

What do you suppose the reaction would be if a government employee was fired for disrespecting the Bible during a protest on his own time – and in another state?

Thirteen members of what California authorities called “a cult-like” group of Christian immigrants from El Salvador were tracked down by sheriff’s deputies who feared the group was planning to commit mass suicide.

The husbands of two of the women reported to authorities that they thought their wives had been ‘brainwashed’ by the leader of the group, a lady named Marisol Chicas. They told investigators that they feared they might harm themselves.

The sheriff’s department immediately and unquestioningly put out an all points bulletin.

Acting on ‘a tip’ deputies found the group in a public park. The children were playing on swings and the adults were praying in Spanish. When the deputy made contact, he was told they were praying against violence in schools and sexual immorality.

According to a sheriff’s captain, Chicas had been a member of a Christian church in Palmdale where she formed a home Bible study. She later stopped going to church, forming a home church of some 12 to 15 people.

According to Sheriff’s Captain Mike Parker, what convinced them the group was a dangerous cult was letters saying the group was awaiting the return of Christ and would “soon see Jesus and their dead relatives.”

To the deputies, that meant they were some kind of dangerous apocalyptic cult.

“We've got a group here that's practicing some orthodox and some unorthodox Christianity," Parker said. "Obviously this falls under the unorthodox."

"Essentially, the letters say they are all going to heaven to meet Jesus and their deceased relatives," sheriff's spokesman Steve Whitmore said. "Some of the letters were saying goodbye."

As it turns out, the letters were referring to the Rapture and not mass suicide.

Chicas was one of many that calculate the Rapture will take place sometime around the end of the Feast of Trumpets. Every year somebody comes up with a new calculation.

It’s been going on since The Great Disappointment of 1844. Jesus said no man could calculate the day or the hour of the Rapture. Every year, somebody concludes that really means ‘no man but him’.

All of them have been disappointed. But they aren’t usually arrested and involuntarily committed for mental evaluation.

Where these stories intersect is at the 1st Amendment. It guarantees freedom of religion, freedom of speech, freedom of the press, freedom of assembly and the right to petition the government for a redress of grievances.

In these stories all five guaranteed freedoms are shredded, but only for Christians.

Rioting is to be expected. So when it happens, it isn’t the fault of the rioters. The blame falls on the person expressing unpopular speech.

Recall when a group of Muslim imams in traditional Islamic dress were prohibited from boarding an aircraft after they exhibited bizarre behavior at the airport, including loud group prayers at the jetway.

They were later given an apology and awarded monetary damages.

Chicas calculated the Rapture would take place at the conclusion of the Feast of Trumpets and went out with her group to meet the Lord in the air.

She calculated wrong – and got involuntarily committed by authorities for a mental evaluation.

What doesn't seem to faze anybody is how overt the discrimination is.

A California sheriff's captain can make a decisive determination of what constitutes 'orthodox' Christianity and take official action against what he deems to be 'unorthodox.' Nobody mentions the 1st Amendment, which absolutely FORBIDS any police officer from breaking up a public prayer group to ask what they are praying about.

But nobody would DARE to similarly approach a group of praying Muslims.

We spoke about the Cartoonist Formerly Known as Molly in a recent Omegaletter. She was forced into "disappearing" herself and re-emerging in a new place with a new life and a new identity after she offended Islam in a cartoon she drew.

As we get close to the end of this present age, one can see the spiritual madness coming upon the whole world. It is as real as that moment when you start to see somebody's medication is starting to wear off.

When it comes to Islam, out comes the Prozac to take the edge off, until we figure out why it's our fault they are offended this time and who best to sacrifice to appease their anger. (Sorry, Derek Fenton)

But bring up Jesus and suddenly, everybody is wearing the extra-thick tinfoil hats to prevent the kind of brainwashing that leads to praying for peace and morality in a public park.

It beats being forced to check in to a mental hospital to be fitted for yours.