The pastor of the tiny Florida church who aroused a global media firestorm by announcing plans to burn a Koran seems to have stood down for the moment. He was universally condemned and implored not to proceed. My own organization warned against the Koran burning's possible impact on already persecuted Christians living in majority Muslim countries.

Tragically, whole Christian villages overseas can be torched by Islamist mobs and not receive 1 percent of the global limelight that the possible destruction of one book has extravagantly received.

Earlier this week, the Islamic Society of North America (ISNA) convened an Interfaith Summit and press conference in Washington, D.C. Participating church officials rushed to the microphone to broadcast their condemnation of the Florida minister and to endorse ISNA's narrative connecting the Florida controversy with objections to the Ground Zero mosque as evidence of America's burgeoning "anti-Muslim frenzy."

"The threatened burning of copies of the Holy Qu'ran this Saturday ... is a particularly egregious offense that demands the strongest possible condemnation by all who value civility in public life and seek to honor the sacred memory of those who lost their lives on September 11," the interfaith confab intoned. "As religious leaders, we are appalled by such disrespect for a sacred text that for centuries has shaped many of the great cultures of our world, and that continues to give spiritual comfort to more than a billion Muslims today."

Called "Beyond Park 51: Religious Leaders Denounce Anti-Muslim Bigotry and Call for Respect for America's Tradition of Religious Liberty," the interfaith summit's manifesto was signed by the secretary of the United Methodist Council of Bishops, New York City's Episcopal Bishop, the Washington lobbyist for the National Association of Evangelicals, the Catholic Archbishop Emeritus of Washington, the chief of the National Religious Campaign Against Torture [by the U.S.], a Lutheran bishop, and the head of the left-leaning Interfaith Alliance.

They came together to denounce the "derision, misinformation and outright bigotry" against America's Muslims, who have joined a litany in American history of "particular groups…singled out for unjust discrimination and…made the object of scorn and animosity by those who have either misconstrued or intentionally distorted the vision of our founders." And they were "appalled by such disrespect for a sacred text that for centuries has shaped many of the great cultures of our world, and that continues to give spiritual comfort to more than a billion Muslims today." Special criticism was aimed at "politicians and members of the media" who are "exploiting religious differences as a wedge to advance political agendas" and "bearing false witness against the neighbor," inflicting "particular harm on the followers of Islam." 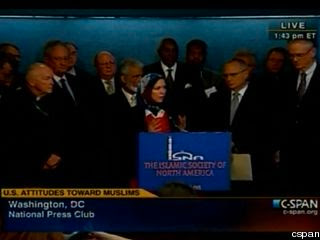 Somewhat creditably, chief of the National Council of Churches Michael Kinnamon actually mentioned "minority Christian communities around the world who live in Muslim countries who feel threatened because extremists use what is happening in this country (anti-Muslim rhetoric and actions) as a pretext to violence." He did not mention that persecution and marginalization of Christians and other religious minorities in many and perhaps most majority Muslim countries will persist with or without "anti-Muslim rhetoric" in the U.S. and is in fact commanded by Islamic law, practiced to some degree even by "moderate" Muslim regimes. But Kinnamon was unique at the interfaith summit's press conference for not focusing exclusively on the purported persecution of Muslims in the U.S. Somewhat more dubiously, he lamented that Western Christians have historically often been guilty of "intolerant rhetoric." And he insisted that Christians should "speak out on behalf of Islam as a peace-loving, peace-teaching faith."

Richard Kilmer of the National Religious Campaign Against Torture noted that "victims of U.S. sponsored torture have been Muslim." And he blasted "anti-Muslim bigotry" as a "blight on America's soul." Former National Association of Evangelicals lobbyist Richard Cizik, now employed by the left-leaning New Evangelical Partnership for the Common Good, cried "Shame on you!" to conservative Christians who are "casually trampling on religious liberty" and undermining the Constitution's First Amendment. But it was not exactly clear at the interfaith summit press conference exactly what qualified as "hatred," "bigotry," and attacks on the Constitution. The event seemed to conflate the possible Koran burning with objections to the Ground Zero mosque and other concerns about Islam's own stance towards religious liberty.

The potential Koran burning, though unsavory and undoubtedly a poor witness by a Christian congregation, is presumably protected by the First Amendment, no less than blasphemies against Christianity, or desecrations of the American flag. Would this same interfaith summit have urgently convened to excoriate destruction of Christian symbols? Or would some of these same largely liberal religious officials have instead solemnly warned of the need for tolerance in that situation? And do all skeptics of the Ground Zero mosque really deserve to be morally ranked with the aspiring Koran-burning pastor and categorized as innately hateful and bigoted?

To what extent can criticism of religion be tolerated without qualifying as hate speech? Majority Muslim countries typically ban perceived blasphemies against Islam and many would like to see international law follow their example. Increasingly liberal Western democracies, fueled by high octane political correctness, are criminalizing criticism of Islam as "hate" speech. Where do the church officials from this interfaith summit stand on the constitutional protection of such speech? And if universal Islam is innately "peace-loving" and "peace-teaching," then why does even the possibility of a Koran's destruction by an obscure pastor arouse the frightful possibility of murderous mobs around the world?

Hopefully the Florida pastor will explore more productive tools for promoting his faith than book burning. And hopefully hyper-politically correct Christian prelates, so anxious to allege hateful motivations, will affirm religious liberty and freedom of speech for all, including persecuted Christians living under Islam, and even politically incorrect Christians in America.

What the Burning Quran Issue Says about Us - American Thinker (C. Edmund Wright)