Mahmoud Ahmadinejad has been the political leader of Iran for more than six years. During this time, he has been a quotation gold mine for prophecy writers. If there were an annual "hate award" for making speeches that are the most anti-American, anti-Israel, or one that denies the Holocaust, Ahmadinejad would sweep all categories each year. The only question for any committee would be which of his statements to inscribe on the plaque.

We still have three months left in 2010, and Ahmadinejad already has all the bases covered. Here is a selection of some of his more inflammatory remarks provided by the Anti-Defamation League's website:

The problem with warning against Ahmadinejad is that you eventually run the risk of being the boy who cried wolf. Mankind has a natural tendency to become apathetic to threats that continue over a long period of time. 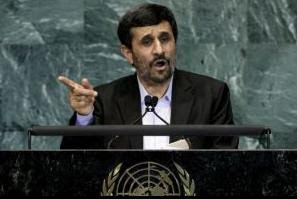 A good example of this condition is the reaction to a speech Ahmadinejad made to the UN last week. During his first of two presentations, he attacked the U.S. and Israel in the same manner as he has done in the past. What was different this time is that the U.S. delegation failed to walk out in protest. There was a mass walkout during his second speech, but that was only after he said the American government staged the Sept. 11 terror attacks.

People who give themselves over to insanity tend to persist in that state. Ahmadinejad is just as nutty as he was the day he took office. When you are under the influence of the demonic forces, you are in union with a mind that is eternally reprobate.

Ahmadinejad doesn't represent a toothless nation. ‏Iran is the financial backer of terrorist organization like Hamas and Hezbollah. It has scientists and engineers actively working on developing new military hardware. Every day that goes by, Iran is one step closer to producing enough bomb-grade material to manufacture a nuclear weapon.

History tells that it is foolish to ignore the rantings of a mad man. When Adolf Hitler was rising to power, he was largely dismissed as a buffoon by non-Germans. In 1940, Charlie Chaplin satirized Hitler in the movie "The Great Dictator." Decades later, Chaplin said in his autobiography that he would not have made the movie about Hitler had the extent of the Nazi horrors been known.

Our failure to deal with Ahmadinejad has doomed us to go down one of two likely paths: Israel will be forced to act or Iran will eventually achieve nuclear capability. Because Iran has already built up a huge conventional arsenal, an Israel strike would set off a chain reaction throughout the Middle East. Just last week, Ahmadinejad promised the U.S. a war "without boundaries" if his nation is attacked.

The situation in the Middle East has been at a hair trigger for a very long time. The fact that we have people like Ahmadinejad somehow managing to stay within limits seems to indicate that God has some end-time plan in the works.