When we consider the danger faced by our military men and women overseas, we can forget that there are others battling on the front lines without guns. Ten humanitarian aid workers in Afghanistan were killed last week when they were pulled from their vehicles, robbed and then shot to death by rebel gunman in the remote northern territory of Badakhshan, Afghanistan.

The leader of the humanitarian group, 61-year-old Tom Little, had lived in Afghanistan since the 1970's with his wife and had raised three daughters there. Little was an American optometrist who refurbished disposable supplies from the US and brought them to Afghanistan. The group was returning from a three-week voluntary medical aid trip to the Nuristan region where they had been providing unpaid and much-needed dental, visual, and prenatal care to impoverished villagers. Little was helping to set up small-scale manufacturing for eyeglasses in villages, and until last week his run-ins with insurgents had been relatively peaceful. 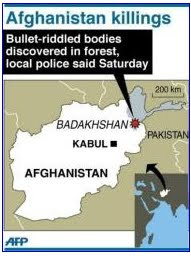 Family members identified the other slain Americans as 32-year-old Cheryl Beckett, a women's health specialist who helped to replant the war-barren landscape with vegetable gardens and useful crops; videographer Brian Carderelli, 25; Dr. Thomas Grams, a dentist who traveled to remote areas of the world to bring thousands of toothbrushes to needy children and treat patients who had never seen a dentist; Glen Lapp, 40, a nurse who ran his own eye care program and hoped to be "a little bit of Christ in the world"; and veteran humanitarian worker Dan Terry, 63. Others killed included Daniela Beyer, 35, of Germany; Dr. Karen Woo, a 36-year-old women's doctor and bride-to-be from Great Britain; and two Afghani men - Mahram Ali, 50, the father of two disabled boys and Ahmed Jawed, the group's 24-year-old cook. The lone survivor of the attacks was the Afghani driver who had been working with the aid organization for four years and who apparently pleaded with the attackers and recited verses from the Koran.

The ten humanitarian workers were shot at close range, dying of one or two bullets to the head or chest. The Taliban claims responsibility for the atrocity, accusing the workers of spying and trying to convert Muslims to Christianity. Authorities are not sure whether the Taliban is directly or indirectly responsible, or whether it has simply claimed acts perpetrated by lawless rebels. Improvised explosives are the usual weapon of choice used by militants, particularly in the violent southern regions of Afghanistan.

International Assistance Mission, based out of Kabul, organized the trip the humanitarian workers were taking. Director Dirk Frans suggests that the attack was likely motivated by robbery rather than by Taliban fears of Christian proselytizing.

While many of the humanitarians were Christians, they were apparently not serving as evangelists. As the father of Cheryl Beckett told The New York Times, "They try to be the hands and the feet of Jesus, not the mouth of Jesus." They were out to serve the people of Afghanistan, and yet they were still killed.

The workers were unarmed, unpaid, and the group had written permission for the trip from the Afghan government. Hans Ronnlund, assistant to the executive director of the volunteer group, insists that their medical staff does not carry Bibles, contrary to Taliban member accounts of the executions. Local police investigations report that the group was accosted on the road, led into a nearby woods, robbed of their belongings, and shot.

Christians and non-Christians, Afghanis and foreigners, and every news source, international body, and government official commenting on the slaughter in unison have stated that the killings were unprovoked and unjustifiable. Vocal observers point out only the gentle and humanitarian stance of workers, compliant to Afghani culture, studied, cautious, selfless and kind, with only other human needs in mind. (Had the group been openly promoting the Gospel of Christ while fixing children's teeth, the murders would have been equally unjustified, but would the world have condemned them in the same way?)

According to Director Frans, International Assistance Mission plans to carry on with their work in Afghanistan despite the attacks, saying, "It has already affected many people. Many of our staff are afraid," but assuring, "We've been here for 44 years. We've been here through all the civil war ... So I don't think this is the time to leave. But it will affect our work." He and the group are cautious, but remain devoted and determined.

The number of attacks on non-governmental workers in Afghanistan has dropped 35 percent since 2009, accounting for 19 abductions and the deaths of 17 aid workers prior to this slaying.

A total of 422 foreign soldiers have been killed in Afghanistan this year, including five NATO troops killed in the south by Taliban explosives Sunday of this week.