Ground Zero Mosque is Not a Religious Freedom Issue

After the New York City Landmarks Commission voted unanimously last Tuesday to deny landmark status to 45 Park Place, thus clearing the way for the construction of an Islamic supremacist mega-mosque at Ground Zero, New York Mayor Michael Bloomberg framed the entire controversy as an issue of religious freedom. But he is ignoring some of the key issues that make this less a question of religious freedom and more one of whether or not Islamic supremacism is going to advance unimpeded in the United States.

“We may not always agree with every one of our neighbors,” Bloomberg began in an address Tuesday, as if the entire problem of the global jihad were one of theological disagreement (interestingly, Osama bin Laden and other jihadists would emphatically agree with Bloomberg’s point here — their problem with America is ultimately theological).

“But we also recognize,” Bloomberg continued, “that part of being a New Yorker is living with your neighbors in mutual respect and tolerance. It was exactly that spirit of openness and acceptance that was attacked on 9/11.”

In other words, let pro-sharia Islamic supremacists build a 13-story mega-mosque at Ground Zero, or the terrorists win.

At the heart of Bloomberg’s argument was his contention that “of all our precious freedoms, the most important may be the freedom to worship as we wish” — and that he therefore had no grounds to stop the mosque at Ground Zero even if he wished to do so.

Yet in reality, this is not really a freedom of religion issue at all. No one is advocating that Muslims should not be allowed to build mosques in the U.S., although I maintain that those mosques should be carefully scrutinized by law enforcement for jihad activity — and Muslims who are genuinely peaceful, eschew sharia, and are loyal American citizens should have no problem with that. The question here is one of the appropriateness of the location. 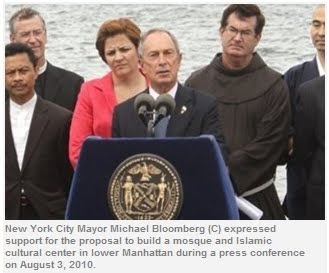 Does the freedom of religion really allow any group to build anything anywhere? As a recent parody had it, would the KKK be allowed to build a “shrine of reconciliation” on the site of the black Baptist church bombed by racists in the early Sixties? Would Michael Bloomberg really have no problem with that? Would he stand up as stoutly for the KKK’s religious freedom as he has for Ground Zero mosque Imam Feisal Abdul Rauf and his gang of Islamic supremacist deceivers?

And deceivers they are. Besides being an open advocate for sharia and restrictions on the freedom of speech in his book What’s Right with Islam, Rauf has refused to denounce Hamas.

What’s more, Bloomberg’s insistence that this is a simple religious freedom issue ignores the historical significance of the site. The Landmarks Commission considered the site for landmark status based solely on its architectural significance. The commission never bothered to consider calls to landmark the Burlington Coat Factory building based on its historical importance: into it crashed the landing gear from one of the 9/11 planes. It ignored appeals to do this despite the fact that buildings of far lesser historical significance, like the Triangle Shirtwaist Company and the Stonewall Inn, have been designated as landmarks in New York.

But a 9/11 war memorial? No way — it is more important that the gods of multiculturalism be appeased by the construction of this mega-mosque.

Until the mosque is actually built, however, the game isn’t over — and with an increasing number of prominent politicians (Sarah Palin, Newt Gingrich, John McCain and others) coming out against the mega-mosque, it can still be won in the court of public opinion.

And if it is not won, once this mega-mosque is built, if it is, many who today are anxious to prove their multiculturalist, non-“bigoted” bona fides and support for a spurious view of religious freedom will rue the day.