Professor Accused of Hate Speech Keeps Job After All

In May, Dr. Kenneth Howell was dismissed from his teaching duties at the University of Illinois Urbana-Champaign for describing homosexual sex as immoral. Now, UIUC has announced that Dr. Howell has not been fired after all and will be teaching religion classes at the university this fall semester.

As he had done repeatedly since 2001, Dr. Howell discussed the issue of homosexuality with his Introduction to Catholicism class at UIUC on May 3, 2010. In a lecture entitled "The Question of Homosexuality in Catholic Thought" Howell explained the moral distinction between same-sex attraction and actual homosexual acts. Bringing in philosophical arguments about natural moral law, Howell described the Catholic Church's position that homosexual sex is immoral.

In the many semesters that Howell had taught the Introduction to Catholicism class, he'd had students who disagreed with this position on homosexual sex, but on May 3, the issue created an uproar in the class. To help clarify the issue, Dr. Howell sent his students an email contrasting the philosophies of natural moral law and utilitarianism in dealing with the question of homosexual sexual acts.

"Natural Moral Law says that Morality must be a response to REALITY," Howell wrote in the e-mail. "In other words, sexual acts are only appropriate for people who are complementary, not the same."

That email was sent all over the campus. One student, not in Dr. Howell's class, sent the email to Dr. McKim, director of the LGBT Resource Center at the University and founder of the "queer studies major", calling Howell's letter "hate speech." 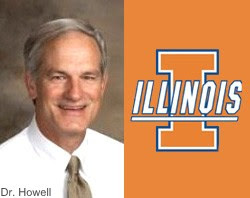 On May 28th, Dr. McKim had a meeting with Dr. Howell and informed him that his email could hurt the University and that he would no longer be teaching there. On June 2, Dr. Howell wrote Dr. McKim an email seeking a peaceable resolution to the situation, and McKim responded in part saying, "I want to reiterate that the decision has already been made to have someone else teach our courses on Catholicism. This is the decision of the department, of the college, and of the university. We are currently in the process of finding someone else to teach... Introduction to Catholicism in the Fall."

According to Associate Dean Ann Mester, Dr. Howell would not longer teach his classes because his email "violate[s] university standards of inclusivity."

Dr. Howell sought the help of the Alliance Defense Fund (ADF), wrote to the University in defense of Dr. Howell's freedom of speech, saying:

By relieving Dr. Howell, the University has violated his clearly established right to free speech, a right that is of 'critical importance' on a public university campus 'because it is the lifeblood of academic freedom.' It has punished him for the content and viewpoint of his in-class speech, without even allowing him to defend himself or explain his remarks. And it has done so simply because some people were offended, thus succumbing to an unconstitutional 'heckler's veto.'

The ADF demanded that the University reinstate Dr. Howell, and at first UIUC insisted that Dr. Howell had not been fired, he was simply not teaching any classes. However, on July 28, the school responded with a letter that stated:

The School of Literatures, Cultures and Linguistics will be contacting Dr. Howell to offer him the opportunity to teach Religion 127, Introduction to Catholicism, on a visiting instructional appointment at the University of Illinois, for the fall 2010 semester.

The school says that the matter is still being investigated.

"He that is first in his own cause seemeth just; but his neighbour cometh and searcheth him" (Proverbs 18:17).