(Arutz Sheva News) - Estimates of the amount of oil in the Rosh HaAyin discovery have risen to 1.5 billion barrels, and there is more oil off-shore, but it is not yet known how much of the “black gold” can be extracted for commercial use.

The new estimate, along with the gas and oil finds off the Mediterranean Coast, raise the likelihood that Israel will be self-sufficient for energy for the next three decades and even become an exporter of gas. The amount of oil at Rosh HaAyin represents a tiny percentage of Israel's oil consumption, but development is continuing in the area as well as in the Dead Sea. 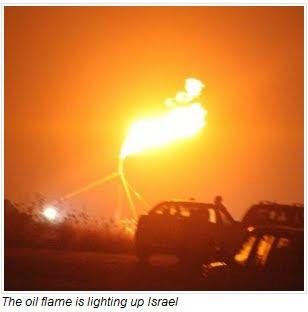 Economists have noted that the discoveries will have a huge impact on society, creating more jobs and strengthening the shekel against world currencies.

Investors in the project at Rosh HaAyin, located on the edge of Samaria and several miles east of Tel Aviv, have been waiting anxiously for months for news about the amounts of oil underground at the Megged 5 oil well. The full engineering report will not be available until mid-September, but the company has decided to adopt the recommendation in the initial report.

Oil samples were found as having high quality with very little sulfur, and the amount of water in the samples was less than 10 percent.

It added, “A reasonable estimate of the amount of oil...is 1.525 billion barrels of oil” but warned that the final estimates may be lower, with a chance that they could even be higher. The report does not include estimates of other sections in the field.