Iran to Start up First Nuclear Plant in Days

"You don’t want a messianic apocalyptic cult controlling atomic bombs," Benjamin Netanyahu told Jeffrey Goldberg shortly before Netanyahu was sworn in as Israel's Prime Minister. "When the wide-eyed believer gets hold of the reins of power and the weapons of mass death, then the world should start worrying, and that’s what is happening in Iran."

Former U.S. Ambassador to the United Nations John Bolton announced on Tuesday that Iran will go nuclear within eight days unless somebody does something about it - and fast. Fox News' headline certainly grabs one's attention: "Israel Has Until Week's End to Strike Iran Nuclear Facility, Bolton Says."

In other words, Israel strikes Iran, or we face the end of the world. That's how it sounds.

The situation is this: Iran has been working to build nuclear facilities on its own for awhile, and it has faced its share of struggles. Jeffrey Goldberg quoted National Security Council official Gary Samore in the September issue of The Atlantic as saying, "They are running into some technical difficulties, partly because of the work we’ve done to deny them access to foreign components. When they make the parts themselves, they are making parts that don’t have quality control."

It was expected that Iran could cross the "nuclear threshold" within a year, despite these problems. Policy makers have therefore long been struggling to decide how to handle Iran as sanctions fail to halt Iran's nuclear program altogether.

A year is not a great amount of time, but there is a buffer there. How did we get from a year buffer to suddenly facing the point of no return on Saturday? Russia. 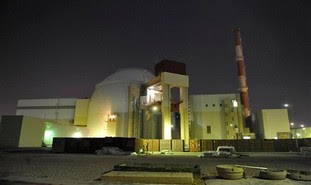 Russia has been working to build the Bushehr facility for Iran since 1995, but has faced a variety of setbacks. Those have apparently been overcome. Russia announced on Friday that a company will begin loading nuclear fuel at Iran's Bushehr plant on Saturday, August 21st. If Israel were to strike the plant, they would have to do so before those fuel rods are loaded. Once they are in place, a strike on the nuclear facility could send radiation into the air and water, including the Persian Gulf.

Bolton doubts that Israel will be able to do anything in such a short amount of time. Barring additional problems, Iran will likely have its first power plant started up by next week. If the power plant is only used to produce power, that's one thing. However, spent fuel rods can be used to derive weapons-grade plutonium – which presents a major problem. As Bolton noted, "What this does is gives Iran a second route to nuclear weapons in addition to enriched uranium. It's a very, very huge victory for Iran."

There are some small comforts in all of this: Russia did make Iran agree – cross their hearts – to return all spent fuel rods to Russia. Also, Israel has been quite aware of the nuclear plant problem for some time now and has certainly worked out various plans for ways to deal with it. The US can still factor into this predicament as well. The Obama Administration has repeatedly said that all options are on the table and Obama has made it clear he recognizes the serious danger posed by a nuclear Iran. Obama knows that if Iran goes nuclear, all non-proliferation hopes whisk out the door.

Yet, Iran may not stick by its agreement with Russia, and Israel and the United States may just stand by with their mouths open. That is quite possible too.

Policy makers around the world know that Iran's nuclear prowess is definitely the biggest international security issue facing the conscious world today. Iran's potential future possession of nuclear weapons will affect us all. The big question has always been, so, what is the best way to deal with this problem?

Israel could possibly strike Iran. The Israelis have successfully destroyed the nuclear power plants of two of their enemies in the past, and they got away with it. Syria and Iraq never fully recovered their nuclear programs after those strikes. Israel could hardly lose respect on the world stage for making the attacks. In fact, a number of countries would be secretly grateful for the destruction of Iran's nuclear plants, including Western-allied Arab states in the Middle East who would be forced to align with Iran if it possessed nuclear weapons. Besides, the world has come to expect preemptive strikes from Israel.

Taking out Iran's nuclear sites would not be a simple feat, however. Not only would Israeli planes have to get through Saudi or Iraqi air space (with or without tacit permission), and destroy all the centrifuges and missile plants on the first try, but they would have to find some way to guarantee that they did indeed annihilate all the bad stuff. Israel would also be exposing her people to immediate harm. Iran has warned that "Israel's existence" would be in danger if it made the strike, meaning that Iran would retaliate, and Israel would have to contend with attacks both from Hezbollah and Iran. The threat of regional war looms. Israel has to consider the possibility that its relations with the current US Administration might also be sacrificed in an Iran strike. The whole thing could get wildly out of hand.

On the other hand, as Benjamin Netanyahu has joked, "Let me tell you a secret. The American military is bigger than Israel’s." As some Israeli officials have noted, the United States could make a strike on Iran's nuclear plants with much greater ease than could Israel. Netanyahu also has made the point very clear over the years that a nuclear Iran is not only a danger to Israel, but to the entire world. The United States has a deep interest in keeping Iran nuke-free, and the United States has the power to make strategic strikes in a way that Israel never could. Of course, while George W. Bush repeatedly said he would not attack Iran's nuclear plants, few people believed him – and while the Obama Administration has repeatedly said that all options are on the table, nobody really thinks Obama will order strikes on Iran, especially not right now, this week.

Israel is deeply endangered by a nuclear Iran. The current Persian regime has made its severe anti-Semitism excruciatingly clear. Iranian President Mahmoud Ahmadinejad denies the Holocaust and openly excoriates Israel, but he's not alone. Former Iranian president Ali Akbar Hashemi-Rafsanjani said nine years ago, "The use of an atomic bomb against Israel would destroy Israel completely while [a nuclear attack] against the Islamic countries would only cause damages."

The Persians aren't apparently fazed by the doctrine of Mutual Assured Destruction.

Ezekiel Chapters 38 and 39 describe the occasion in which God Himself intervenes to quell the ill-fated invasion of Israel by Magog and its allies (Persia, Cush, Phut, Libya, Gomer, Togarmah, Meshech, and Tubal). Hesiod, ''the father of Greek didactic poetry,'' identified Magog with the Scythians and southern Russia in the 7th century B.C. - before Ezekiel was born. This passage also appears to anticipate the use of nuclear weapons.

One nation notably absent from Ezekiel's list of invaders is Syria. In Isaiah 17:1, 4, the prophet warns that that one day Damascus would become a heap of ruins; perhaps its destruction occurs before the events of Ezekiel 38 and 39.

For now, Iran and Syria both strain to see what Israel does while Iran's first nuclear plant prepares to go live. The whole world is on watch. Whether now or later, it's just a matter of time before one of the most anticipated battles in Scripture takes place.

The Difficulty of Launching a Successful Iran Strike - The Atlantic