A recent Pew Research Poll reports that as many as 20 percent of Americans - and as many as 31 percent of Republicans - consider President Barack Obama to be a Muslim. Only one-third of the populace thinks he is a Christian, and 43 percent do not know what religion Obama upholds. The doubts about Obama's Christianity have mounted since March 2009, when Pew estimated that 11 percent of Americans considered Obama a Muslim. After Obama's recent comments asserting the right of Muslims to build a mosque near New York's Ground Zero, the same poll may have demonstrated an even higher margin of doubt about Obama's faith in Christ.

President Obama has declared that he is a Christian. He describes a milestone of his faith - public confession and acceptance of Christ - as taking place at an altar call in Rev. Jeremiah Wright's church over twenty years ago. Obama broke ties with Wright and that particular church body, which was widely accused of being un-American and un-Christian, and he now holds a membership at the United Church of Christ although he does not attend regularly.

Last week, White House Deputy Communications Secretary Jen Psaki reiterated the official position on Obama's religious belief, saying, "President Obama is a committed Christian, and his faith is an important part of his daily life. He prays every day, he seeks a small circle of Christian pastors to give him spiritual advice and counseling, he even receives a daily devotional that he uses each morning."

Neither Obama nor the White House seem eager to spell out details, however. "I have a deep faith," Obama has explained. "I'm rooted in the Christian tradition."

Many Christians doubt the depth of Obama's actual commitment to Jesus Christ. Obama's multi-cultural and multi-religious upbringing certainly did mold his perspective on salvation. His roots in Christianity developed in a complex soil of many influences, and the result is a plant with fruit alarming to most conservatives - Obama's belief that, "there are many paths to the same place."

Obama was born to a non-practicing Muslim father and raised in Indonesia, a primarily Islamic country. His father left his mother when Obama was only two. In childhood, Obama attended a private Catholic elementary school in Jakarta that taught students of both Christian and Islamic backgrounds, and he claims to have heard both catechism and Koranic readings in the classroom. He was raised by an agnostic but "spiritual" mother who brought him to church on holidays, and later, occasionally took him to Buddhist temples for worship. 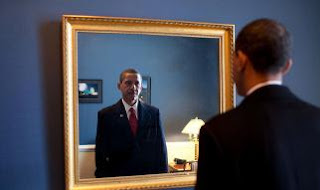 During the 2008 Saddleback Civic Forum, speaking before what was likely a Christian majority, Obama declared that it was Jesus who saved him, a Jesus he has a personal relationship with. He also doesn't want that personal relationship to influence him in governing. He explained to Cathleen Falsani of the Chicago Sun-Times, "I am a great admirer of our founding charter [the Constitution] and its resolve to prevent theocracies from forming and its resolve to prevent disruptive strains of fundamentalism from taking root in this country. I think there is an enormous danger on the part of public figures to rationalize or justify their actions by claiming God's mandate. I don't think it's healthy for public figures to wear religion on their sleeve."

To Obama, the United States is not a Christian nation, but a nation in which Christians are allowed the freedom to worship as they choose along with peoples of all other faiths."

President Obama may not be Muslim, but his brand of Christianity leaves enough leeway to cause confusion and concern among evangelicals. "My particular set of beliefs may not be perfectly consistent with the beliefs of other Christians," Obama told Newsweek. "There's the belief, certainly in some quarters, that if people haven't embraced Jesus Christ as their personal savior, they're going to hell."

In a discussion with Franklin Graham, Mr. Obama explained, "I do not believe that my mother, who never formally embraced Christianity as far as I know, went to hell."

There is no evidence that Obama has ever practiced Islam, but critics point to a history of Obama public comments lauding the accomplishments of the Islamic world, the beauty of the Islamic call to prayer, and his willingness to quote the Koran in speeches. Graham's portrait of Obama's faith is guarded:

Obama's statements do raise some questions. What - if any - advantage does Barack Obama see in choosing Christ? Why did he choose Christ and not another of his many perceived paths to God? If, in the name of inclusion and acceptance, he sees nothing sacred in Jesus Christ, what will he do to preserve the role of Christianity in America's heritage and America's future? As a self-declared follower of Christ, is he willing to present a loving but unyielding example of Christ to the world?

Obama's resolve feels discomfortingly like gelatin. It's lukewarm at best, and very dangerous at worst. As James Dobson told Newsweek, he believes the President is "deliberately distorting the traditional understanding of the Bible to fit his own world view, his own confused theology." He presses pluralism onto American society and denies the power of Christ whom he says saved him.

A July 12th Rasmussen survey reported that only 15 percent of Americans believe that US relations with Israel will improve over the next year, and 44 percent expect things to remain on shaky ground. As many as 31 percent of Americans expect the two allies' relationship to change for the worse. Israeli ambassador to the US Michael Oren reports that the chemistry between Obama and conservative Prime Minister Netanyahu is so strained, US-Israeli relations are at the worst they've been in 35 years. According to The Daily Telegraph, Oren privately met with foreign ministry workers a week before this month's meeting between Netanyahu and Obama, telling them, "Relations (between Israel and America) are in a state of tectonic rift in which continents are drifting apart."

Is Obama's faith a nebulous "feel-good" belief system that has a mere veil of Christianity? Or does his "deep faith" truly identify with, not just a Christ who forgives, but also a Christ who reigns? Though a politician may not be expected to hold his own as a theologian, the leader of the free world should be capable of clearly conveying his beliefs and intentions, if not to the entire world, at least to his own constituents.

Why Does Obama Tell Muslims America Is Nation of ‘Non-Believers’? - CNS News