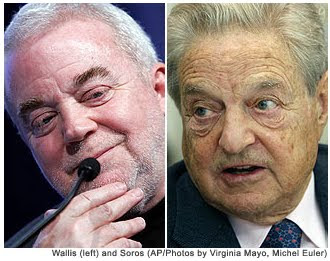 Wallis originally rebutted a criticism of "religious progressives" for being allied with Soros in 2005:

"I know of no connections to those liberal funds and groups that are as direct as the Religious Right's ties to right-wing funders."

“No, we don’t receive money from George Soros.”

“Wallis’ initial denials and then ultimate confirmation of Soros funding for Sojourners is a revealing turning point for the evangelical left.

“Long insisting he represents a mysterious Christian ‘third way’ more enlightened than the old Religious Right, Wallis now stands exposed as what he always was: a man of the political left. From his days 40 years ago as a radical Students for Democratic Society activist, to his championing of the Marxist Sandinistas in 1980s’ Nicaragua, Wallis has always allied himself with secular leftist groups hostile to the historic Church.