One of the clearest indications of the progression of Bible prophecy is the frequency of end-time events. In Matthew 24:8, we are told that the last days will be the tail-end of an exponential curve of activity. Jesus mentioned a great variety of signs — spiritual, natural, societal, and geopolitical — and then He said that these signs will be like "birth pangs."

This year started out with monstrous earthquakes striking the nations of Haiti, Chile, and China. The death toll from the Haiti quake has now risen to more than 230,000. The Chile earthquake is in the record books as the seventh-greatest earthquake ever recorded. 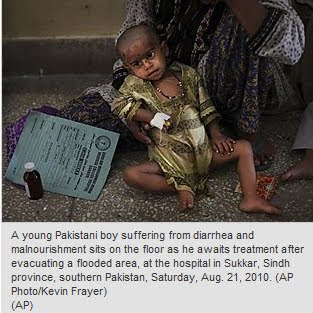 In the past few weeks, there has been an upsurge in birth-pang activity. Three categories stand out:

This level of activity is amazing when you consider that the year is only a little more than half over. The Lord certainly seems to be trying to get man’s attention, but I can see that man's stubbornness is a huge obstacle. It amazes me to see how quickly historic disasters fade from memory.

Several news organizations are reporting that support for the flood victims in Pakistan may be suffering from donor fatigue. In the first two weeks of the crisis, the funds being pledged by rich nations are just 20 percent of the amount given for the Haiti earthquake. In the same way, there may be a birth-pang of fatigue at work. I have not seen prophetic awareness this low since the early 1990s.

God is very patient, but He is no fool. He is not going to send an endless number of warning signs. I would never say that apathy will force God to act, but it could be the calling card that the Almighty has decided to use to shake up our world.

"And there shall be signs in the sun, and in the moon, and in the stars; and upon the earth distress of nations, with perplexity; the sea and the waves roaring; Men's hearts failing them for fear, and for looking after those things which are coming on the earth" (Luke 21:25-26).

Asian Superbug On The Loose - PR-inside.com

California Overdue for 'the Big One,' Geologists Say - FOX News