Iraq's Top Military Officer: US Troop Withdrawal Is Too Soon

Lt Gen Babaker Zebari, Iraq's top army officer, is criticizing as premature the planned US withdrawal and he warned that the Iraqi military might not be able to take charge for another decade which is a warning that echoes the remarks made by Saddam Hussein's former foreign minister Tariq Aziz that the Americans were leaving Iraq to the wolves.

General Zebari told a defense conference in Baghdad that the Iraqi army would not be able to ensure Iraq's security until 2020 and that the US should keep its troops in Iraq until then adding that the problems will actually start after the 2011 pullout of US troops. 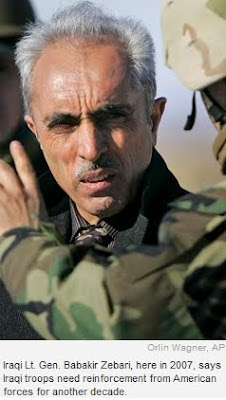 The planned withdrawal of US troops from Iraq has the Iraqi military leaders saying, "Not now", a statement that is setting the stage for Bible prophecy to be fulfilled.

The US involvement in Iraq has from the beginning been very controversial and the planned pullout of US troops being questioned by the Iraqi military leaders is only adding to the controversy. Iraq's top military officer has warned that the withdrawal is premature and will cause harm to the rebuilding of his war torn nation. The focus on Iraq since the first Gulf Crisis in 1991 has been almost a part of daily life in our world which is actually setting the stage for the end of times scenario that can be found in Bible prophecy.

Iraq has a 4000 year history that dates back to the worldwide flood of Noah's day when Nimrod established the city of Babylon, Genesis 11. Biblical Babylon, modern day Iraq, has been a major player throughout world history and will be world headquarters for the economic power base in the last 3 1/2 years of the Tribulation Period, Revelation 18. The world dictator, the Antichrist, will be based in Iraq, Biblical Babylon, as he controls the economic, political, and governmental operations of this world, Revelation 13:16-17.

Iraq will continue to be on the front page of the news until God's prophetic plan for this world is fulfilled.

Analysis: Looming debate over whether to keep US military in Iraq past 2011 already on display - FOX News