Will Obama Keep His Abortion Promise?

The Democratic congressional majority will soon decide whether taxpayers should subsidize abortions at military hospitals. Their decision will test President Obama’s trustworthiness and the voters’ patience.

In March, Obama signed an executive order, after passage of the healthcare reform measure, to preserve policies that keep federal funds from paying for abortions. That order won him enough votes from pro-life legislators to pass the measure. But now pro-abortion Democrats are trying to do an end-run on the President’s promise.

All but one Democrat, Sen. Ben Nelson (Neb.), on the Armed Services Committee embraced an amendment to the annual Defense Authorization Bill that would overturn a 1996 congressional ban (10 U.S. Code Sec. 1093(b)) on abortion in military facilities, except in cases of rape, incest or to save the life of the mother.

The measure will likely pass the Democrat-controlled Senate and then be conferenced with the House’s version of the bill which doesn’t have a similar provision. It’s not clear that Obama, the nation’s most pro-abortion president ever, would honor his commitment against funding abortion by vetoing the bill. 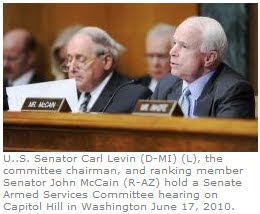 There’s doubt because the Democrats are putting up a smokescreen to provide the President plausible deniability. Sen. Carl Levin (D.-Mich.), chairman of the Senate Armed Services Committee, said abortions under the amended provision would be at “no expense to the government.” The senator is wrong about the costs because he lacks supporting research. Besides he knows most Americans wouldn’t support the measure if it meant taxpayer money helped fund abortions.

A December 2009 Quinnipiac University poll of likely voters showed 72% said they oppose allowing abortions to be paid for with public funds. Just 23% supported the idea, and 5% did not know.

Abortion is an incredibly divisive moral and ethical issue. It is understandable why pro-abortion Democrats like Levin want to present the proposed amendment as cost neutral. But a review of the costs associated with providing abortions at military facilities should convince fence-sitting legislators to favor the current ban.

Under the proposed amendment, abortion becomes a patient-paid procedure. That’s why young, single military women who don’t make a lot of money but seek most abortions will act like any consumer who pursues the best value for her dollar. She will weigh her options – civilian vs. military clinic – and will likely select the civilian clinic because her military medical coverage doesn’t include abortions and the civilian clinic will likely be cheaper.

The abortion industry sets its charges to match costs which are based on volume. The Pentagon doubtfully knows the potential demand for abortion services among its qualified healthcare recipients. That population includes women who are on active duty, mobilized reservists, and female dependents of active and retired service members.

Consider the 229,426 women on active military duty in 2009 for illustration purposes. A number of studies among military women found 12%-19% are pregnant at least once each year. The Guttmacher Institute, a non-profit organization that advances reproductive health, states that 22% of all pregnancies end in abortion. If that’s a reliable figure then the number of abortions among active duty military women in 2009 was between 6,056 (12%) and 9,590 (19%).

Guttmacher states that 88% of abortions occur in the first trimester. For illustration purposes accept that a first trimester abortion costs the woman $650 and all other abortions cost $3,000 each. Therefore, active duty military women in 2009 paid somewhere between $5.6 million and $8.9 million for abortions. The cost for all military healthcare eligible women could potentially be at least twice these figures.

Now consider the uncalculated costs associated with setting up abortion clinics across the world for military women and dependents. Then decide whether those costs would be off-set by the fees paid by abortion-seekers. If the fees collected from abortion-seekers won’t cover the costs, then the taxpayer is funding abortions.

First, there are personnel costs which will be significant because most of the abortion providers will be contractors. After President Clinton forced through an executive order for military facilities to provide abortions in 1993, the administration found very few military personnel willing to participate in the procedure. The lack of willing military healthcare professionals led to two efforts: hiring abortion contractors and coercing military healthcare providers to provide abortions. Fortunately, Congress reinstated the ban in 1996 before either alternative matured.

It is unlikely military healthcare professionals will volunteer to participate in abortions and besides Levin promised military doctors would not be compelled. That means the government must solicit contract abortionists, their medical, and administrative staffs. The administrative staff would schedule the procedures, collect and process payment, manage the clinic and liaise with the military.

The number of required clinics would dictate staffing. That number could be limited which would require the abortionists to service multiple facilities. Their travel costs would have to be factored into the contract as would training and standby support among active duty medical staff for the inevitable complications such as incomplete abortions, infections and bleeding.

Second, there will be facility and equipment costs. The military doesn’t have spare medical treatment space and extra beds. So abortion clinics would displace other medical practitioners in already overly stressed hospitals and clinics. That would create the demand for new buildings and or leased facilities which come at a high cost.

Abortionists require surgical facilities to reduce the risk of infection and specialized life-support equipment that must be purchased and maintained. The abortion clinic will also require administration and patient holding areas along with the usual office equipment, furnishings, and supplies. These requirements will vary based upon the anticipated number of abortions planned per day and the locations.

Third, there will be significant support costs. It is unlikely all military facilities will provide abortions which means women seeking abortions must travel. Does the woman seeking an abortion pay for her transportation costs when she’s stationed aboard a ship? A helicopter ride off a ship at sea followed by a flight to the clinic – overseas or in the states – can be very expensive. Then after the abortion, does she pay her costs back to her job site?

There are also routine support costs associated with a medical facility. Clinics must be cleaned, “medical waste” must be disposed of, medicines issued, and laboratory results provided.

Finally, there are readiness costs which are difficult to quantify. Establishing abortion clinics at military healthcare facilities will drive away some medical professionals because of conscience objections. Additionally, the military community which tends to be rather conservative and religious will object to their medical facility becoming an abortion mill. That could cause morale problems and may further stigmatize the clinic and impact its use.

Congressional Democrats lack credibility when they argue the military abortion amendment won’t cost the taxpayer because they don’t know the facts. They should validate those costs with an independent study that scientifically estimates the abortion demand and the price the military must charge to keep elective abortions cost neutral. Likely a military-hosted abortion will be significantly more expensive than its civilian competitor.

Until Congress exercises due diligence President Obama must honor his word not to use public funds for abortions by vetoing the Defense Authorization Bill if it reaches his desk with the abortion provision.

When Feminism Kills — Abortion As ‘The Lesser Evil’ - AlbertMohler.com