Israeli Prime Minister Netanyahu is engaging in a U.S. media blitz. In part, he is calling for direct peace talks with the Palestinians. He is trying to remind Americans that there are fundamental areas of agreement between Israel and the Obama government, despite 14 months of tensions.

But most noteworthy to me is that in his public statements, Netanyahu is focused almost exclusively on jumpstarting the peace process with the Palestinians, not on highlighting the growing danger from Iran. The nuclear reactor in Bushehr, Iran, will go “hot” in mid-September, it would now appear — not August as previously expected. And in a rare moment of Arab diplomatic clarity, the United Arab Emirates’ ambassador to Washington said this week he thinks a nuclear-armed Iran is a severe threat to the Middle East and strongly hinted that preemptive military strike may be the only way to stop Iran from getting the Bomb. 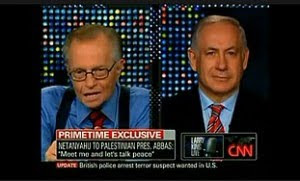 Yet, Prime Minister Netanyahu does not seem to be indicating that war with Iran is imminent. He certainly is not preparing the U.S. or the world for the need for a pre-emptive attack in the next few weeks or months. Indeed, Sen. John McCain is telling reporters he does not believe Israel is preparing for an imminent attack. In the Middle East, anything is possible. But for the moment, it would appear the Israelis do not believe a summer war is needed, or wise.

Let’s keep praying for the peace of Jerusalem and for peace throughout the region, as well as for wisdom for the Prime Minister and his Cabinet to know how best to deal with Iran in the weeks and months ahead.

In the last 24 hours, Netanyahu has done interviews on ABC, CBS, and CNN, speaking directly to the American people, and I think he’s been doing a good job. During a 20 minute interview, Katie Couric asked Netanyahu why 71% of Israeli Jews dislike President Obama. Wisely, Netanyahu did not take the bait. He conceded there are disagreements, but he certainly did nothing to exacerbate underlying tensions. Rather, he noted that he had invited the President to visit Israel and looked forward to extending hospitality to the First Family and give them a chance to get to know the Israeli people. The President said he is ready to visit Jerusalem. Let’s hope he carries through.

In other events, Netanyahu met with U.N. Secretary General Ki Ban Moon. He also met with U.S. Defense Secretary Bob Gates. The PM is in New York today, and is expected to fly to Cairo on Friday to meet with the ailing Egyptian President Hosni Mubarak who is reported to have cancer.

Most interesting to me was an answer the PM gave to Larry King towards the end of their hour-long conversation last night. King asked Netanyahu if he ever has the chance to relax. Netanyahu said yes. On Saturday — the Sabbath — he rests and relaxes and he noted that one thing he looks forward to is reading the Bible for an hour an half with his youngest son, who recently won a contest on Bible knowledge. He said the time refreshes him spiritually and that he and his son are learning a great deal from God’s Word. I really appreciated the PM’s remarks and it reminded me of Psalm 119:97-100,

“Oh, how I love your law! I meditate on it all day long. Your commands make me wiser than my enemies, for they are ever with me. I have more insight than all my teachers, for I meditate on your statutes. I have more understanding than the elders, for I obey your precepts.”

CBS's Couric to Netanyahu: 'Should You Be More Strongly Advocating' on Obama's Behalf? - News Busters