I spent an hour today watching a video. It is rare that I do so…too many places to go and people to see. But today, I was able to watch prophecy unfold before me.

“And He will lift up a standard for the nations and assemble the banished ones of Israel, and will gather the dispersed of Judah from the four corners of the earth “ (Isaiah 11:12).

This is clearly not referring to the return from Babylon, but rather the “second time” (v. 11), not coming from Babylon but from “the four corners of the earth.” 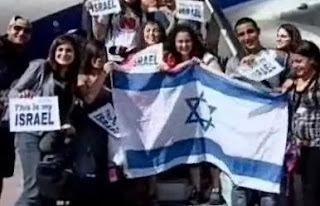 What I saw was utter joy and celebration on the hearts of young and old, single adults and families. Each person was overjoyed to be home to Israel — though most had probably never stepped foot in Israel.

Why would able-bodied, gainfully-employed, potential-filled men and women leave the land of freedom and liberty into which they were born and take citizenship in the most hated nation of the world? Why leave the comforts and safety of the USA for the threat of war that is a daily fact of life in the Middle East?

Why? Because God is at work in their hearts, fulfilling the prophetic word He delivered 2,600 years ago when He promised that His people, long scattered through the earth, would be drawn to return. He promised that he would “raise a signal for the nations” which would be used to “gather the dispersed of Judah.” Today I was able to watch as God fulfilled His Word.

So today, I prayed for the peace of Jerusalem (Psalm 122:6). And I prayed, “Thy Kingdom come” — the Kingdom of the Messiah, looking to the day He receives His throne — the throne of His father David — and He reigns over the house of Jacob, and rules the nations with a rod of iron (See Daniel 2:44, Psalm 2).