General David 'Petraeus' Not General 'Betray Us' After All

In 2007, General David Petraeus said that the "surge" was working to help stem the violence in Iraq. At the time, then-Senator Obama disagreed with the general, calling the surge, "a disastrous foreign-policy mistake." While he openly criticized the job Petraeus was doing in Iraq, Obama's opinions of the general appear to have changed since winning the election. President Obama nominated General David Petraeus, and the US Senate unanimously confirmed him to command the Afghan war effort in a 99-0 vote on June 30th. On July 4th, at a ceremony at NATO's Kabul headquarters, General Petraeus made his first public appearance to address the troops and accept the position.

President Obama chose General Petraeus to head up US and NATO forces after firing General Stanley McChrystal for insubordination after he gave negative commentary on Obama, Biden, and the current administration in a highly-publicized Rolling Stone Magazine interview. General McChrystal had been commander in Afghanistan for one year.

Who Is General Petraeus?

Fifty-seven-year-old General David Petraeus is a four-star general who has served with the United States Army since 1974. He is the son of Dutch immigrant sea captain Sixtus Petraeus and his American-born wife Miriam. David Petraeus graduated from the United States Military Academy at West Point, where he earned a Bachelor of Science degree and graduated in the top 5% of his class. He earned his Master of Public Administration and a PhD in International Relations from Princeton University and has has been serving in the US military since his West Point graduation in 1974. General Petraeus is a highly decorated and respected officer. 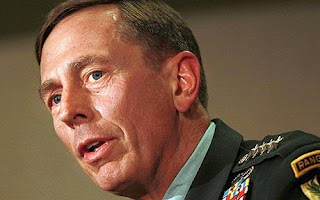 In a letter, which he read Sunday in a speech before a small group including Afghan members of the International Security Assistance Force (ISAF), General Petraeus emphasized that the effort in Afghanistan "is a contest of wills." He said:

"Our enemies will do all that they can to shake our confidence and the confidence of the Afghan people. In turn, we must continue to demonstrate our resolve to the enemy. We will do so through our relentless pursuit of the Taliban and others who mean Afghanistan harm, through our compassion for the Afghan people, and through our example and the values that we live... We must also continue our emphasis on reducing the loss of innocent civilian life to an absolute minimum... Protecting those we are here to help nonetheless does require killing, capturing, or turning the insurgents."

Petraeus oversaw coalition forces of the Multi-National Force Iraq with the leadership of Ray Odierno, currently Commanding General of the United States Forces - Iraq, and lead the US and her allies to an overall success in the Iraq war in 2007. While the struggle there has continued, the US helped Iraq to begin a new post-Hussein chapter on a foundation of relative peace. Petraeus was presented with the Defense Distinguished Service Medal for his work in Iraq, which included rebuilding the University of Mosul. Afterward, he jointly oversaw the military staff and writing for Field Manual 3-24 on Counterinsurgency, and developed training exercises and lesson plans for soldiers based on what he saw in Iraq.

In September of 2007, the liberal activist organization Moveon.org took out a full-page ad in The New York Times entitled, "General Petraeus, Or General Betray Us?" questioning whether David Petraeus had accurately represented the efficacy of the troop surge and rebuilding process in Iraq to Congress, accusing him of "cooking the books." The article drew a flurry of heated commentary from media, bloggers, and politicians, but when the dust settled, the skirmish revealed that though critics found fault with General Petraeus' perhaps overly-optimistic views of the surge's immediate results, the proof of his efficacy lay in the fact that troops were able to instill enough order in Iraq for the American military to gradually vacate and leave local leaders in control. Moveon.org removed the attack on Petraeus from its site this past month as he was selected to replace General McChrystal. Apparently, his "betray us" status has been updated.

In December, Obama signed for an additional 30,000 American troops be sent to the Middle East, and they are now arriving in Afghanistan. June proved to be the deadliest month in the war's nine year history for coalition units, and General Petraeus' appointment at this critical period may spark the much-needed turn-around the forces have been needing as an expert on counterinsurgencies.

David Petraeus has not only garnered numerous military decorations, but been lauded as a top citizen, highly influential individual, respected intellectual, and "Man of the Year" by a host of organizations and publications, including The American Legion, The Daily Telegraph, Prospect, The Weekly Standard, US News and World Reports, the American Enterprise Institute, and many more.

"Not only is Petraeus an expert at turning around failing counterinsurgencies, but he is also extremely knowledgeable about events in Afghanistan," says Max Boot, a senior fellow with the Council on Foreign Relations. "The transition to him means minimal disruptions."

Afghanistan: Standing Shoulder to Shoulder with the United States - The Heritage Foundation