With the different meetings being held at the White House between US President Obama and the Israeli PM Netanyahu there has emerged the question of the unwavering support for the Jewish state of Israel that has been the mainstay down through the years of America's intimate alliance with Israel as being good for both the US and Israel.

The condemnation of the Jewish settlements in Judea and Samaria, the insistence by Israel that they have a right to defend their borders including the area of the Gaza Strip, and the controversy surrounding the city of Jerusalem have been the sticking points that have caused these questions by US leaders as to whether their support is as strong as it has been for the Jewish state. 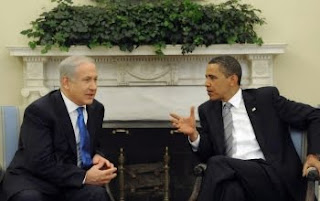 The US starting to waver on its support for the Jewish state of Israel is done at its own peril and does set the stage for Bible prophecy to be fulfilled.

For over 200 years, the US has been one of the major supporters and protectors of the Jewish people and since 1948 America has been the mainstay of support for the Jewish state. Over the last several years and moving towards a low mark in US support for Israel, which has been good for both countries, we are seeing this relationship drift apart more and more almost on a daily basis.

America's disapproval of Jewish settlements has been a focus of US critics as well as the right for Jews to buy, build, and live in any section of the city of Jerusalem. I mentioned earlier that America breaks these ties with Israel at its own peril. God told Abraham, Genesis 12:3, I will bless those who bless thee and I will curse those who curse thee. I do not mean that Israel is right all of the time, but when Israel does what God's Word says and God rewards the Jewish people, all peoples must support them

The ancient Jewish prophets wrote of God returning the Jews to their land, Ezekiel 34:35. He promised to give them a state, Ezekiel 37. These prophecies are in the process of being fulfilled.

If America or any other nation of the world decides to drop their support for the Jewish state, they do it at their own peril.