For an estimated three million Darfur villagers, it's been seven long years of bombs dropped by (old Russian ex-military planes) camel-back raids, displacement, rape, and being robbed of humanitarian aid. For refugees unable to leave the region, it's been as many as seven years in makeshift homes without basic utilities like clean water or electricity, public schools, jobs, markets, doctors' offices or hospitals. And for the orphaned, it's been as many as seven years without parents to provide or care for them.

In 2004, George W. Bush declared Sudan's National Congress Party's military-backed burning, bombing, and raiding of Darfur region villages a "genocide". Though many people recognized that the incessant pillaging of the Masalit, Fur, and Zaghawa villages equalled the systematic destruction of Sudan's black Christians and animists, the UN and the International Criminal Court have not seen fit, until this July, to indict Bashir with genocide for the initial attacks that took place years ago. The fallout amounts to a virtual lost generation of uneducated, voiceless, landless, and orphaned.

This past March, just when the beleaguered folks living in displacement had an offer of democratic election dangled before them, it was whisked away. Voters were excluded or dissuaded by violence, a much-disputed 2008 national census, and by the ballot-box-stuffing of Khartoum insiders. It was a reign in which the Janjaweed militia targeted and torched specific villages, slaughtered inhabitants, and pursued the survivors into the nether regions simply for belonging to ethnic groups suspected of sympathy with rebels. Omar al-Bashir has been the head of state who mandated, commissioned, supplied, and gave his blessing to it all. And in April of 2010, his displaced and ravaged and orphaned voters supposedly re-elected him - an accused genocidal maniac - to an eight-year term as their first democratically chosen leader in 20 years. 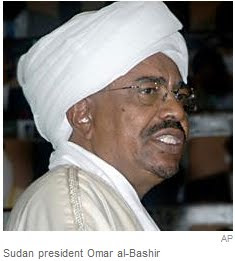 Yes, April saw Sudan's first multi-party election in 20 years. The campaign months of March and April saw the voting populace and activists intimidated, beaten, subjected to false arrest, held prisoner, or threatened with sexual assault - at the hands of Sudan's security forces. Omar al-Bashir, backed by his National Congress Party (built upon what was the National Islamic Front Party) won, and though the international community admitted that the election was skewed, there seems to have been little other public outcry in defense of his "constituents."

Al-Bashir's ruling party assures outsiders that the tribes have always fought amongst themselves, and that his government is not to blame. Some accounts, such as that given by Roger Winter of the US Agency for International Development, indicate that the violence is indeed coming from the capital of Khartoum and the Arab-Muslim government of Bashir.

So far, peace agreements that Bashir has signed, such as the Comprehensive Peace Agreement of 2005, have been nothing more than empty promises meant for show or appeasement, since conditions haven't really changed anything in Darfur.

The International Criminal Court, Human Rights Watch, and Amnesty International have called for officials in the neighboring country of Chad, which is an ICC signatory, to arrest and turn Bashir over to the court for trial. Sudan signed a peace treaty this year with Chad, and Bashir is known to be hosting him this month for the Community of Sahel-Saharan States conference on July 22nd. The government of Chad refused to detain Bashir, saying that it would be wrong to invite Omar al-Bashir into their country and then arrest him. Chad's government prefers to let Bashir rest in the hands of the African Union, which has a track record of repeatedly brushing off opportunities for Bashir's arrest. So much for the international community's ability to mete out justice.

While the news has quieted about Darfur in recent years, the trauma has not gone away. We need to consider our brothers and sisters in danger as though we were in danger ourselves and remember Sudan in prayer.