Israel today is in peril as never before: diplomatically, militarily, politically, culturally…just about any “ly” you’d care to name.

That’s in human terms, you understand. I adamantly reject the notion that Israel can be or will be destroyed. Idiots like the one that runs Iran have come and gone for thousands of years, and Israel is here. This one single factor is the biggest faith-builder I can list.

Still, until the day of the Lord sweeps in on us like manna from heaven, we live in this world, the one in which daily dangers have to be faced, and faced-down. 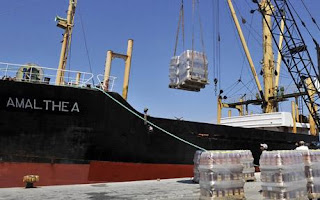 It was reported this week that Lybia will send a “blockade-busting” vessel into the Mediterranean, in order to confront the Israelis, who are attempting to keep more weapons out of the hands of Gaza terrorists. An organization headed by Gaddafi’s son will send the ship. One suspects Benjamin Netanyahu will react as he has for the past month: with steely resolve.

I find it quite interesting that another front in the battle against Israel has been opened up on the waves of the sea. With terrorists attempting to infiltrate from the south, via “humanitarian” ships, and news of Israel’s discovery of huge natural gas reserves further north, one can “see” that even this heretofore benign border—the only safe one Israel has experienced—is now becoming problematic.

Obviously, Israeli ships and subs patrol the waters, but what happens if a Russian contingent ventures too far inland? Or another Arab country? Truly, then, Israel will be surrounded.

Israel has now discovered that all but one of the injured “humanitarian” workers who were injured during an altercation with IDF troops aboard the Mavi Marmara last month are Turkish nationals aligned with various shady groups.

Members of the IHH (Foundation for Human Rights and Freedoms and Humanitarian Relief—Insani Yardim Vakfi) are aligned with Hamas and the Union of the Good, an Islamic group linked to the diabolical Muslim Brotherhood. This information comes from the Israeli NGO The Intelligence and Information Center. No doubt, leftists in America and Europe will dismiss these findings as they peddle their anti-Israel narrative.

However, a Danish institute also has reported that IHH maintained ties to Al Qaida and other “global jihad networks” in the 90s.

This blockade fiasco will continue for awhile, and Israel will suffer for it. How preterists and others who minimize Israel in prophecy cannot see that the stage is being set for Zechariah’s prophecies to be fulfilled—Israel alone facing a global onslaught—is beyond me.

I do have an issue with prophecy teachers who fit future events into too-neat current events packages. From what I hear in other Christian circles, this is one of the chief reasons Bible prophecy doesn’t get a hearing in some denominations. However, they are also guilty of throwing the baby out with the bath water. Clearly, something major is on the horizon; Israel cannot simply keep “playing for time,” as an Israeli journalist wrote last week.

Something has to give.

In recent weeks, Hillary Clinton’s true views of Israel have come out, as the secretary of state has condemned Israel building in “disputed” territories, including Jerusalem. Turkey’s Erdogan has become a menacing figure, placing his country on the brink of anti-Israel fervor. Obama is and will remain hostile to the Jewish state. My friends in Europe report that England and other countries are baring their fangs at Jews.

And the U.N. continues its anti-Israel activity (for a mind-boggling look at this situation, check out Alex Grobman’s book, Nations United).

My friend Mark Hitchcock will have more to say about these developments on July 17, during a webcast of our conference, Flashpoint 2012. Our aim is to provide you with information that will enable you not only to pray for Israel, but to prepare yourselves and your families spiritually (and perhaps physically) for what is to come.

With even Israel’s water border now becoming threatened, it is “safe” to say that prophecy is becoming potent.