A Big Win for Gay Marriage in Massachusetts

While all eyes were on California, where a very high-profile case about same-sex marriage is moving to a judge’s ruling, a federal judge in Massachusetts handed down rulings in a pair of cases that struck at the heart of the Defense of Marriage Act [DOMA], which passed into law in 1996. As the rulings stand now, DOMA is both challenged and weakened, and momentum for the judicial legalization of same-sex marriage grows. 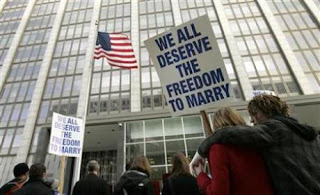 The Massachusetts rulings came in the U.S. District Court in Boston, where Judge Joseph Tauro decided two cases, both representing challenges to parts of DOMA. In the end, Judge Tauro struck down one of the Act’s major provisions, but left the rest intact . . . for now.

When adopted in 1996, the Defense of Marriage Act represented a bi-partisan determination to define marriage, in terms of Federal law, as the union of a man and a woman. There were two main provisions within DOMA. One established the fact that the Federal government would not recognize same-sex marriages, even if legalized by individual states. Thus, there would be no extension of Federal marriage benefits to same-sex couples.

The second major provision of DOMA protects the states from any requirement to grant legal recognition to a same-sex union legal in any other state.

Judge Tauro struck down the first provision, and left the second standing. In his decision, the Judge ruled that DOMA “plainly encroaches” on the right of Massachusetts to establish its own laws regulating marriage. By prohibiting extension of Federal programs to same-sex married couples on par with heterosexual couples, the Judge ruled that DOMA violates the Equal Protection Clause of the Constitution.

“This court has determined that it is clearly within the authority of the Commonwealth to recognize same-sex marriages among its residents, and to afford those individuals in same-sex marriages any benefits, rights, and privileges to which they are entitled by virtue of their marital status . . . . The federal government, by enacting and enforcing DOMA, plainly encroaches upon the firmly entrenched province of the state.”

In the meantime, even though Judge Tauro’s ruling extends only to the Commonweath of Massachusetts for now, its effects, as with respect to so many other Federal court cases, will extend far beyond the Bay State.

Make no mistake - these rulings in Massachusetts are a major blow to the sanctity of marriage, not only in that state, but in all fifty states. Once again, we face a summer with marriage on trial.

Blundering Into a Culture War - The American Spectator