Coming to a Doctor’s Office Near You? The New Abortion Strategy

The tragedy of abortion remains one of this nation’s greatest reasons for shame, and the fact that over a million abortions are performed each year is nothing less than horrifying. In light of this tragedy, it is at least encouraging to know that abortion, though an industry of death, is not a growth industry. At least for now.

All that may change if a new movement meets with success. As reported by Emily Bazelon, a new movement seeks to move abortions from abortion clinics to your local hospital, medical school, and physician’s office. In other words, those behind this new movement intend to mainstream abortion as medical practice, and to hide it behind a facade of medical respectability. 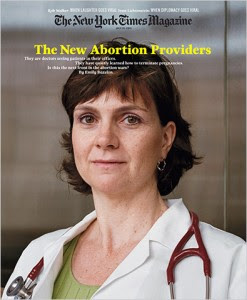 Bazelon’s report, “The New Abortion Providers,” appears as the cover story in the July 18, 2010 edition of The New York Times Magazine. As she reports, this new movement is training family physicians and other doctors to perform abortion as a standard part of their medical practice. As the cover of the magazine states, “”They are doctors seeing patients in their offices. They have quietly learned how to terminate pregnancies.”

The story of how and why this is happening is important, and Bazelon’s cover article demands attention. If this movement is successful, abortion will become institutionalized within American medical practice.

The background for this new movement is itself interesting. When the U.S. Supreme Court handed down the infamous Roe v. Wade decision legalizing abortion in 1973, 100 obstetricians and gynecology professors released an open letter, suggesting that abortion clinics would be unnecessary if half of the nation’s obstetricians would make abortion part of their medical practice. They also called upon hospitals to do “their proportionate share.”

But, as Bazelon reports, this was not to be. As a matter of fact, hospitals largely worked their way out of the abortion business. Hospitals accounted for 80 percent of abortion facilities in 1973, when abortion was legalized. By 1988, 90 percent of abortions took place in an abortion clinic. In Bazelon’s words, “The American Medical Association did not maintain standards of care for the procedure. Hospitals didn’t shelter them in their wings. Being a pro-choice doctor came to mean referring your patients to a clinic rather than doing abortions in your own office.”

This was not what the architects of the abortion rights movement had in mind. “This was never the feminist plan,” Bazelon explains. She goes on to argue that the founders of the abortion clinics also did not intend those facilities to become the mainstays of the abortion industry, but this is rather hard to square with the financial incomes those clinics defend.

Nevertheless, the fact is that abortions were largely isolated to abortion clinics, and most doctors kept themselves far from involvement in abortion. In the words of a much-cited 1992 medical journal article, “Under pressure and stigma, more doctors shun abortion.”

The turning point in Bazelon’s article comes when she explains that this new movement is doing everything it can to reverse these trends — and to put abortion in the mainstream of American medical practice. Bazelon calls this “a deliberate and concerted counteroffensive.”

This abortion-rights campaign, led by physicians themselves, is trying to recast doctors, changing them from a weak link of abortion to a strong one. Its leaders have built residency programs and fellowships at university hospitals, with the hope that, eventually, more and more doctors will use their training to bring abortion into their practices. The bold idea at the heart of this effort is to integrate abortion so that it’s a seamless part of health care for women — embraced rather than shunned.

Steinauer was a leader in founding Medical Students for Choice, a group that pushes for more visibility and for residency programs in abortion procedures and reproductive health. Largely due to the MSFC and the Accreditation Council for Graduate Medical Education, fully half of the 200 OB-GYN programs in the country “integrate abortion into their residents’ regular rotations.”

What this fellowship program and the larger movement aim to accomplish is nothing less than the normalization of abortion within the practice of medicine. As Bazelton observes, “The providers that make up the new vanguard don’t define themselves as ‘abortion doctors.’ They often try to make the procedure part of their broader medical practice — by spending much of their week seeing patients for general gynecology or primary-care visits, and by being on call on the labor and delivery floor. If the young doctors succeed at making abortion mainstream and respected within medicine, abortion could move from clinics to doctor’s offices and hospitals.”

Another part of this movement is driven by the Kenneth J. Ryan Residency Training Program, started by former National Abortion Federation director Uta Landy and her husband, a professor of obstetrics and gynecology at the University of California at San Francisco. That program finances abortion training for medical students and doctors on 58 campuses. That program, Bazelon reports, is funded by one foundation and one anonymous donor. The foundation is the Susan Thompson Buffett Foundation, named for the late wife of investor Warren Buffett. According to Bazelon’s report, Warren Buffett contributed $3 billion to the foundation, and most of the foundation’s spending goes to “abortion and contraception advocacy and research.” Bazelon cites a report in the The Wall Street Journal that credited Buffett with funding the research to produce the abortion pill. Even with this massive funding in place, Warren Buffett has largely escaped public attention on the abortion issue.

And that is the aim — to normalize abortion without public notice, avoiding the protests outside abortion clinics. “We want to fight the battle, but not all of us are martyrs,” said one physician.

They have a long way to go. The report states that only 2 percent of abortions are now done in a physician’s office and only 5 percent are performed in a hospital. The medical profession is still reluctant, at the very least, to embrace abortion as normal practice.

This highlights the challenge of making abortion truly mainstream — of moving beyond residency training and outside the haven of medical-school faculties, so that more doctors offer abortions when they join a regular OB-GYN or primary-care practice. As yet, all the success in training new doctors hasn’t translated into an increase in access. Abortion remains the most common surgical procedure for American women; one-third of them will have one by the age of 45. The number performed annually in the U.S. has largely held steady: 1.3 million in 1977 and 1.2 million three decades later. In metropolitan areas, women who want to go to their own doctor for an abortion can ask whether a practice offers abortion when they choose an OB-GYN or family physician. But in 87 percent of the counties in the U.S., where a third of women live, there is no known abortion provider.

Emily Bazelon’s report offers a fascinating and important look at abortion in American today — past, present, and future. She points sympathetically to this new movement and its aims, but she seems to sense that the medical profession is still resistant to abortion, and may remain so.

She writes with great skill and insight, but she lets her own disposition slip when she refers to the aborted contents of a womb as “pregnancy tissue.”

This new movement, fueled by fervent abortion advocates and financed, in part, by Warren Buffett’s billions, may make real headway. We must pray that it does not. The normalization of abortion within the practice of medicine would be a tragedy beyond words — the embrace of death within a profession dedicated to life.

The front cover of the magazine asks the question: “Is this the new front in the abortion wars?” If the magazine’s editors did not believe that indeed this is the next front in this long war, they would never have asked the question. Now, thanks to Emily Bazelon and this report, we all know the answer to that question.