In a recent nationwide poll taken by the Knesset - Israel's legislative body, 49% of the body politic of Israel said they want to see the holy temple rebuilt on the Temple Mount in Jerusalem where there once stood two previous Jewish temples. The last one, Herod's temple, was destroyed in 70AD by the Roman soldiers led by General Titus.

The Israeli public is about evenly split on whether they believe the temple will be rebuilt with a slight edge 42% - 39% to those who believe that the third temple will be rebuilt. Given the current political climate, the onset of construction of the temple is not likely to go over quietly in the Islamic world which currently has day to day control of the Temple Mount. 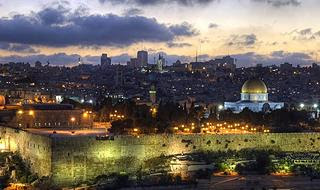 The almost 50% of Israelis who want to see the holy Jewish temple rebuilt in Jerusalem are in perfect harmony with what the Bible reveals will happen in the last days.

In a recent national poll carried out in Israel, 49% of the Israelis said that they want to see the rebuilding of the third temple in Jerusalem on the Temple Mount. The Temple Mount has been the location of two previous temples, the one built by King Solomon some 3000 years ago and the one built by Zerubbabel 2500 years ago. The second temple, known as Herod's Temple, because it took Herod 46 years to refurbish Zerubbabel's temple, was referred to by the rabbis as the temple that if you had never seen it, you had never seen a beautiful building.

Since 70AD, when Herod's Temple was destroyed, there have been countless efforts to rebuild it on the Temple Mount. The ancient Jewish prophet Daniel said that there will be a third temple in Jerusalem during the seven year Tribulation period (Daniel 9:27). Jesus confirmed Daniel's prophecy in his Olivet Discourse (Matthew 24:15) when He said, when you see the abomination of desolation in the temple, flee Jerusalem. That abomination will be the Antichrist entering the temple and claiming to be God (II Thessalonians 2:4). Revelation 11:1 guarantees that there will be a temple in Jerusalem. John the Revelator was told to measure the location for the next Jewish temple.

50% of Israelis are right - there will be a temple in Jerusalem and maybe very soon now. Bible prophecy will be fulfilled.

Will the Temple be rebuilt? - Ask Dr. White (Randy White)