Recipe for a New Blood Libel

I love watching Israel being exonerated. It has happened time and again over the years: Israel’s enemies falsely level blood libels against the Jews, the reflexively anti-Israel news media snatches and runs – exhilarated – with the story, spreading the perverted version of events far and wide. Sooner or later their “reporting” is shown to be inaccurate if not downright false, and Israel is absolved. 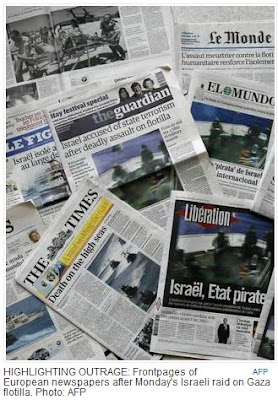 Not that this makes much difference to those who hate Zion(ism) – of course. But it is music to the ears and eyes of those who love Israel.

The attempt Monday morning by Israel’s navy to enforce its blockade of the Gaza Strip terrorist mini-state is just the latest example. There is no telling what distortions you may have heard, but let me lay out how it was.

Days ago two organizations – the Free Gaza Movement and the Turkish Insani Yardim Vakfi (IHH) – the latter known to have ties with internationally-recognized terrorist organizations – began making announcing their intention to sail a flotilla of boats towards Gaza in an attempt to breach the Israeli government’s blockade of the Strip.

Israel, which banned all maritime traffic to Gaza in an effort to limit the quantity of weapons being shipped into the Hamas stronghold (from which thousands of rockets have been fired upon Israeli civilian population centers) made it clear it would not permit the ships to reach Gaza.

The government of Turkey – an erstwhile ally of Israel’s that has become increasingly antagonistic towards the Jewish state in recent months, while moving deeper into the orbit of Ahmadinejad’s Iran – stepped into the developing fray, warning Israel not to try and stop the boats.

Emboldened by this, the “activists” sailed to Cyprus and prepared for the final leg of their voyage to Gaza. Israel, making every effort to avoid a confrontation – short of backing down – invited the demonstrators to sail into Ashdod and have their humanitarian supplies shipped overland to Gaza from there. Israel’s officials outlined in detail the exact course of action they would follow (which they did) to foil the flotilla’s purposes. The “peaceniks” rejected the offer and paid the warning no heed. And on Sunday evening set course for Gaza.

This was Israel’s response: Naval ships intercepted the flotilla and Israeli commandos, armed with paintball rifles (!) and wearing side arms strictly for self-defense, slid to the deck of the largest ship – the Mavi Marmara. Their purpose: to tell the protesters one last time that they would not be allowed into Gaza.

A few minutes later a reporter for Turkish television was heard screaming into his camera: “These savages are killing people here, please help!”

The news flashed around the globe. That is to say, an uninformed and misinformed version of what was happening flew from network to network.

The headlines and reporting, condemnations and outrage voiced on the morning of May 31, 2010 were predictable.

Israel had attacked a sailing flotilla of peace activists who were simply seeking to take humanitarian aid to the “suffering” people of the Gaza Strip.

IDF soldiers had opened fire indiscriminately on the unresisting protesters, killing up to 19 of them.

The Israelis had “dropped from a helicopter onto the deck of a Turkish ship [and] immediately opened fire on unarmed civilians.”

Israel had committed “a massacre,” cried PLO chief Mahmoud Abbas, while his mouthpiece, Sa’eb Erekat, pronounced Israel guilty of “another war crime.” For good measure the PA/PLO immediately declared three days of mourning for those killed.

CNN: “Israeli commandos killed at least 10 people in pre-dawn raids on a flotilla of six ships carrying aid for the Palestinian territory of Gaza…”

The network also gave a platform to Gaza-based Hamas spokesman Sami Abu Zuhri who said: “The Israeli attack on the Freedom Flotilla is an ugly crime and against international law and this reflects the nature of the criminal Israeli occupation.”

Deceived (willingly?) by these hysterical headlines, officials like Catherine Ashton, the European Union’s high representative for foreign affairs, and senior UN figures Robert Serry and Filippo Grandi laid the blame for the whole affair at Israel’s door and demanded Israel immediately lift the blockade of Gaza.

The new British Foreign minister John Haig also called on Israel to open all the crossings for free flow of aid into Gaza.

Sky News’ Dominic Waghorn said Israel had “handed an enormous PR victory to the Hamas.” Waghorn is oblivious, it seems, to the fact that it is his and other international journalists’ skewed coverage of what occurred that was providing that very PR victory for their Arab friends.

What really happened? Israel has plenty of footage revealing the truth.

You can view the sickening scenes here , and here, and here.

The “peace-loving” protesters tried to lynch the Israeli soldiers. As each paintball-armed soldier reached the deck he was leaped upon by iron-bar wielding, chair-smashing, knife-stabbing and even gun-firing “activists.”

Some soldiers were beaten senseless. One was dropped headfirst onto a lower deck, sustaining serious injuries. Another was stabbed, his pistol was grabbed from him and used to fire at the Israelis. Stun grenades and firebombs were thrown at the soldiers.

When they eventually opened fire, it was only to defend themselves, and we still do not know how many of those killed were killed by the soldiers or by the terrorists (because that’s what they were) who were trying to shoot the IDF men.

This is the real story. But don’t hold your breath waiting for the currently convening emergency session of the United Nations Security Council to find in Israel’s favor.

When it comes to the state of the hated Jews, the truth rarely finds traction in the court of international opinion. Thanks largely to the media, many millions of people are primed and ready to believe the worst about the actions of Israel’s Jews. For them it’s a case of: why let the facts get in the way of a convenient and expedient story that further feeds their prejudices and satisfies their twisted desires.