Mosab Hassan Yousef tells Americans that they have no idea about the dangers ahead. Who is this young man and should we pay attention to his warning? Yousef is the son of Sheikh Hassan Yousef, a founding leader of Hamas. The organization is a brutal terrorist outfit responsible for endless carnage not only against Israel, but also America. They currently control what is known as the Gaza Strip, surrendered by Israel for promises of peace in 2005. Only more bloodshed followed this give-away of land. 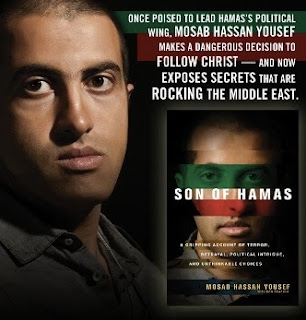 Yousef is the author of the book, Son of Hamas: A Gripping Account of Terror, Betrayal, Political Intrigue, and Unthinkable Choices, published by Tyndale House. He has a remarkable story. Before the age of 21, Yousef saw things no one would want to see from abuse of power, to torture, to death. He also witnessed the behind-the-scenes dealings of top Middle Eastern leaders who make headlines around the world daily. He was trusted by the highest levels of Hamas leadership.

Yousef worked alongside his father, Sheik Hassan Yousef, in the West Bank city of al-Ghaniya near Ramallah, while secretly embracing the Christian faith and serving as one of the top spies for Israel's internal security arm. Yousef was recruited by Shin Bet in 1996 at the age of 18 while at an Israeli detention facility. He then became an official spy for Israel for a decade.

But in spite of his conversion and pro-Israel work, in the eyes of Obama's Department of Homeland Security (DHS) Yousef is a security risk - at least to the top dogs there, including Janet Napolitano. This is the same agency and director who wants to call terrorism a "man-caused disaster." She will not allow immigration agencies to increase deportation of illegal aliens. She claimed "the system worked" when a young Nigerian tried to blow up a plane on Christmas Day. And she allowed the release of a DHS report that said the real homeland threats are war veterans, pro-life activists, gun owners, and individuals who are interested in the end-times. Add to that list a former terrorist, now a Bible believing Christian, who only wants to save the lives of innocent people, particularly Jews and Americans. And somehow Americans are expected to trust Janet Napolitano in spite of her comment that "Amnesty (for illegal aliens) is good for national security." Homeland Security is clueless when it comes to security issues.

But neither Napolitano nor anyone in her department likes Mosab Hassan Yousef, now best known as the "son of Hamas guy." Yousef just revealed on his blog, hosted by Tyndale House, that DHS has asked him to appear on June 30 before immigration judge Rico Bartolomei at the DHS Immigration Court in San Diego. The DHS does not want to grant him asylum which he has asked for because the DHS believes he is "a danger to the security of the United States and he engaged in terrorist activity." My wildest imagination could never make this story up! The department that likes to see no evil, hear no evil, and speak no evil when it comes to real terrorists, is painting with a broad evil brush when it comes to Yousef.

Yousef states on his blog, "Don't think that I am writing this post to get you to feel sorry for me or even to write your congressmen or senators on my behalf. I believe that God is using this situation to expose the weaknesses of Homeland Security and to put pressure on it to make changes that can save lives and preserve freedom."

He also states on his blog, referring to comments he made to DHS folks, "I am the son of Sheikh Hassan Yousef. My father is involved in a terrorist organization, and I would like political asylum in your country. You didn't catch me. I came to you to wake you up. I wanted to tell these folks that they have huge gaps in security and I wanted them make changes before it is too late."

Homeland Security would not even listen to our FBI director who sees Yousef in a far more favorable light. The FBI is heeding the warnings of many, including Daniel Pipes, who states, "Hamas' logistical cells in the U.S. could be quickly turned operational." When and if this happens, Yousef would be an invaluable resource.

"Although it would be a major strategic shift for Hamas, its United States network is theoretically capable of facilitating acts of terrorism in the United States. According to a senior government counter-terrorism official, Hamas could be merging with elements of Osama bin Laden's all-inclusive military arm and the two together would then carry out military strikes against America. They have operations planned for here, they have the capabilities to strike at will, and when the time is right, they will do it."

Yousef concludes, "Exposing terrorist secrets and warning the world in my first book cost me everything. I am a traitor to my people, disowned by my family, and a man without a country."

This ordeal is not new for Yousef. There have been hearings on and off for a couple of years. Yousef states, "When they demanded evidence to support my claim that I was not a terrorist or a security threat, I filed a draft of my book, Son of Hamas. Surely this would make everything perfectly clear. They would discover that I was an intelligence agent, not a terrorist. That I tracked down terrorists and put them in prison. That I was an asset, not a threat. They didn't get it."

They don't want to get it. They want to demonize people of faith who take a stand for righteousness and who want to silence political correctness. They have a distorted view of the truth and probably wouldn't recognize it if it were a five-hundred pound gorilla staring them in the face. Truth is for sale today and the price is cheap.

Yousef invites anyone to come to his hearing at 8 a.m. on June 30 at the Immigration and Customs Enforcement in San Diego, CA. This is located at 880 Front Street, Suite 224.

Because there would be a series of appeals in his case, he is not likely to get deported immediately. Perhaps that is not the point. What is the point is that some in our highest offices of government are coddling real terrorists, reading them their Miranda rights, allowing them to build a mosque near the 9/11 site, and refusing to call them jihadists. But a young man who has saved the lives of many Israelis and Americans is suspect and, if it were possible, would be thrown back to fend for himself among the corrupt, wicked Palestinian leadership. The words of the prophet Isaiah are so true today as we see good being called evil and evil, good (Isaiah 5:20).

Joseph Farah sums it up well:

Exclusive: If Our National Security Operation Doesn’t Shock Us Awake, Will Anything? - Family Security Matters