The Leaders of Russia, Iran and Turkey Meet to Discuss Security Needs that Will Affect the Stability of Our World

Russian President Vladimir Putin, Iranian President Ahmadinejad, and the Turkish PM Tayip Erdogan met in Istanbul in a security summit to discuss problems facing the Middle Eastern region as well as pressing issues that will affect the security of the entire world.

Recent events in the Middle East have caused Russian PM Putin to condemn Israel, the Turkish PM Erdogan to call for Israel to pay the price for defending itself against terrorist attacks, and the Iranian President Ahmadinejad to say that Israel is near the point of their total annihilation. 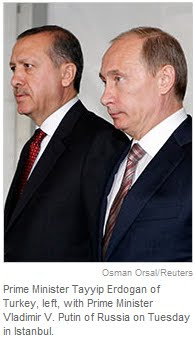 When the leaders of Russia, Iran, and Turkey hold a summit on security in the Middle East, you can know that the world is ever so close to the last days scenario that can be found in Bible prophecy.

In the recent summit on security held in Istanbul, Turkey the leaders of three major world powers, Russia, Iran and Turkey met to discuss the issues facing not only the Middle East, but the world as well, the issues of the proliferation of nuclear power and the ongoing Israeli-Palestinian conflict. Coming into the meeting, all three leaders, Russian PM Putin, Iran's President Ahmadinejad and the Turkish PM Tayip Erdogan all had opinions that Iran has the right to arm itself with Nuclear Weapons of Mass Destruction.

This scenario unfolding in our world today is advancing the preparations for the fulfillment of Bible prophecy. The ancient Jewish prophet Ezekiel wrote 2500 years ago of an alignment of nations that would attack the Jewish state of Israel in the last days. Ezekiel 38:2-6 reveals the nations in this coalition and the first three mentioned are Magog, modern day Russia, Meshech and Tubal in verse 2 and Gomer and Togarmah in verse 6 which is modern day Turkey. The nation, Persia, listed in Ezekiel 38:5 is modern day Iran.

The summit on security held in Istanbul, Turkey with the leaders of Russia, Iran and Turkey seated at the table is indeed setting the stage for Bible prophecy to be fulfilled.