If Israel Is Not Evil, the World Is in Big Trouble

With the exception of the United States, nearly all the world's nations; newspapers, radio and TV news stations; the United Nations; and the world's Leftist academics and organizations have condemned Israel over the Gaza flotilla incident. The characterizations of the Jewish state range from a society so evil that it should not be allowed to exist to a villainous nation that is responsible for a) the suffering of millions of innocent Palestinian men, women and children; b) the lack of Mideast peace; therefore c) the Muslim world's anger at the West; and therefore d) Islamic terrorism itself. 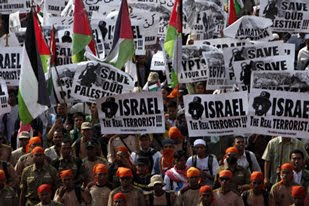 Israel is almost totally isolated. A visitor from another planet would have every reason to report back home that the greatest problem on planet earth was this planet's Jewish state. Though Israel is the size of the American state of New Jersey and smaller than El Salvador, and though its population is smaller than that of Sweden, Burundi and Bolivia, it is the most censured country in United Nations history.

Though Israel is a thriving liberal democracy for all its citizens, including the one out of five that is Arab (83 percent of whom are Muslim), with an independent judiciary and press; though it signed an agreement establishing an independent Palestinian state; though it returned to Egypt every inch of the Sinai Peninsula, a land mass larger than Israel itself with major oil reserves - the world deems Israel a villain.

Though Hamas runs a theocratic police state based on torture and terror, with no freedom of speech, no freedom for any religious expression outside of radical Islam, seeks to annihilate the Jewish state, and its state-controlled media depict Israelis and Jews as worthy of death, the world sees Israel, not Hamas, as the villain.

Here is a random sampling of world reactions:

And not just nations, of course. According to Amnesty International, "It is imperative that Israel lifts the blockade of Gaza without delay, as it is a form of collective punishment ... Israel should invite the relevant UN experts to carry out an investigation ... It begs credibility that the level of lethal force used by Israeli troops could have been justified. It appears to have been out of all proportion to any threat posed."

The Los Angeles Times, in its editorial, posed some deep questions. Here are three:

"Were the boats ferrying novelists and Nobel Peace Prize winners and elderly Holocaust survivors, as news accounts have suggested, or seething Israel haters, as defenders of the raid would have us believe?"

"Was the goal to bring 10,000 tons of aid to needy Gazans in an act of peaceful civil disobedience, or to provoke Israel into just this sort of violent response? ..."

I did not make this up in order to embarrass the LATimes. They really posed this question.

"We agree with U.N. Secretary-General Ban Ki-moon that the blockade '... hurts forces of moderation and empowers extremists.'"

Unlike the Times, many of us thought that Palestinian extremists were more powerful than the "forces of moderation" prior to the blockade.

"There can be no excuse for the way that Israel completely mishandled the incident ... It has damaged Israel's ties with Turkey, once its closest ally in the Muslim world."

"No excuse?" Being beaten to death by "peace activists" while carrying paintball guns is "no excuse"? And why wasn't it Turkey's sponsorship of an Islamist organization labeled a terrorist group by the American government that damaged Turkey's relations with Israel? Why is it not Turkey's cooperation with Iran's Holocaust-denying, Holocaust-planning Ahmadinejad that has damaged Turkish-Israeli relations?

The reason mankind has to hope that the world, its leaders, its newspapers, its so-called human rights organizations and the United Nations are right about Israel is quite simple: If Israel is the decent party in its war with the Palestinian Authority and Hamas - and nearly all the world's countries, nearly all the world's media and the United Nations are morally wrong - what hope is there for humanity? If the world's moral compass is that broken, are we not sailing into a dark age?

Why the Jews? The Reason for Antisemitism - Dennis Prager (Book)