These words are being written before the dust has had a chance to settle on Monday night's naval commando raid of the Gaza-bound Turkish flotilla of terror supporters. The raid's full range of operational failures still cannot be known. Obviously the fact that the mission ended with at least six soldiers wounded and at least ten Hamas supporters dead makes clear that there were significant failures in both the IDF's training for and execution of the mission.

The Navy and other relevant bodies will no doubt study these failures. But they point to a larger strategic failure that has crippled Israel's capacity to contend with the information war being waged against it. Until this failure is remedied, no after-action investigation, no enhanced training, no new electronic warfare doodad will make a significant impact on Israel's ability to contend with the next Hamas flotilla that sets sail for Gaza.

In the space of four days, Israel has suffered two massive defeats. A straight line runs between the anti-Israel resolution passed last Friday at the UN's Nuclear Non-Proliferation Treaty Review Conference and the Hamas flotilla. And in both cases, Israeli officials voiced "surprise," at these defeats.

Given the months-long build-up to the NPT review conference, and the weeks-long build-up to the Turkish-Hamas flotilla, that surprise cannot be attributed to a lack of information. What it points to rather is a cognitive failure of Israel's leaders - from Prime Minister Binyamin Netanyahu down - to understand the nature of the war being waged against us. And it is this fundamental failure of cognition that has landed six soldiers in the hospital, Israel's international reputation in tatters and Israeli spokesmen - from Netanyahu down - searching for a way to describe a reality they do not understand and explain how they will cope with challenges that confound them.

The reality is simple and stark. Israel is the target of a massive information war that is unprecedented in scale and scope. This war is being waged primarily by a massive consortium of the international Left and the Arab and Islamic worlds. The staggering scale of the forces aligned against Israel is demonstrated by two things.

The Hamas abetting Free Gaza website published a list of some 222 organizations that endorsed the terror-supporting flotilla. The listed organizations hail from the four corners of the earth. They include Jewish anti-Israel groups as well as Christian, Islamic and non-religious anti-Israel groups. It is hard to think of any cause other than Israel-bashing that could unite such disparate forces. 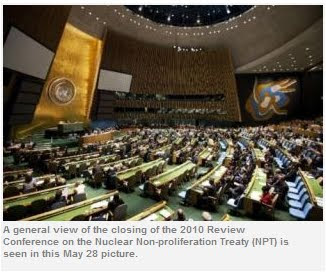 The second indicator of the scope of the war against Israel is far more devastating than the list of groups that endorsed the pro-Hamas flotilla. That indicator is the fact that at the UN on Friday, 189 governments of 189 countries came together as one to savage Israel. There is no other issue that commands such unanimity. The NPT review conference demonstrated that the only way the international community will agree on anything is if its members are agreeing that Israel has no right to defend itself. The NPT review conference's campaign against Israel shows that the 222 organizations supporting Hamas are a reflection of the will of the majority - not a minority - of the nations of the world.

This war against Israel is nothing new. It has been going on since the dawn of modern Zionism 150 years ago. In many ways, it is just the current iteration of the eternal war against the Jewish people.

The Red-Green alliance's aims are twofold. It seeks to delegitimize Israel's right to exist and it seeks to make it impossible for Israel to defend itself. If these aims are met, Israel's destruction will become an historic inevitability.

Until US President Barack Obama took office, Israel's one steady asset in this war was the US. Until last year, the US consistently refused to join the Red-Green alliance because its leaders recognized that the alliance's campaign against Israel was part and parcel of the Red-Green campaign against US superpower status in the Middle East and throughout the world. Indeed, some US leaders recognized that the Red-Green alliance's animus towards Israel stemmed from the same source as its rejection of American exceptionalism.

Dismally, what the US's vote in favor of the NPT review conference's final anti-Israel and by default pro-Iranian resolution makes clear is that under President Barack Obama, the US is no longer Israel's reliable ally. Indeed, what the US's vote shows is that the Obama administration's ideological preferences place it on the side of the Red-Green alliance against Israel. No amount of backpedalling by the Obama administration can make up the damage caused by its act of belligerence against Israel at the NPT review conference.

If Israel's leaders were better informed, in the lead-up to the NPT conference they would have recognized a number of things. They would have realized that Obama's anti-nuclear conference in April, his commitment to a nuclear-free world, as well as his general ambivalence - at best - to US global leadership rendered it all but inevitable that he would turn on Israel at the NPT review conference. The truth is that Egypt's call for the denuclearization of Israel jibes with Obama's own repeatedly held views both regarding Israel and regarding the US's own nuclear arsenal.

Armed with this basic understanding of Obama's inclinations, Israel should have taken for granted that the NPT conference would target Israel. Consequently, in months preceding the conference, Israel should have stated loudly and consistently that as currently constituted the NPT serves as the chief enabler of nuclear proliferation rather than the central instrument for preventing nuclear proliferation it was supposed to be. North Korea exploited its status as an NPT signatory to develop its nuclear arsenal. Today Iran exploits its status as an NPT signatory to develop nuclear weapons. Unless the NPT is fundamentally revised it will continue to serve as the primary instrument for nuclear proliferation.

Had this been Israel's position, it would have been able to undercut US arguments in favor of signing onto the anti-Israel final resolution. So too, such a position would have prepared Israel to cogently explain its rejection of the final resolution without sounding hypocritical.

And that is the thing of it. The Red-Green alliance's aim at the NPT conference was to discredit Israel's deterrent capacity while delegitimizing its right to take preemptive action against Iran's nuclear facilities. Now, due to Israel's failure to make its case against the NPT in the months leading up to the conference, as Israel's enemies use the US-supported final resolution to claim that Israel's opposition to Iran's nuclear weapons program is hypocritical, Israel lacks a cognitive framework for responding.

The fact that Israel still doesn't get the point is made clear by the government's response to the decision. Israel's denunciation of the resolution makes no mention of the fact that the NPT regime itself has become the chief institutional enabler of nuclear proliferation today. So too, disastrously, in a clear bid to pretend away Obama's treachery, Israel actually applauded Obama for emptily criticizing the resolution he voted for. This Israeli response compounds the damage and ensures that the assault will continue and grow stronger.

As to the flotilla, the challenge it presented Israel was nothing new. Israel has been confronted by suicide protestors for a decade now. The fact that these pro-Hamas activists intended to commit suicide in order to discredit Israel on camera was made clear by the fact that the Turkish organizers named the lead ship Rachel Corrie - after the most famous pro-Hamas suicide protestor.

So too, the fact that Israeli forces boarding the ships would be met by trenchant, violent opposition was knowable simply by looking at Turkey's role in the operation. First of all, the Turkish government-supported NGO behind the operation is IHH. As the US government, the Turkish government in the 1990s, the Investigative Project on Terrorism and countless other sources have proven, the IHH is a terrorist organization. It has direct links to al Qaida and Hamas. Its members have been involved in terrorist warfare from Chechnya and Bosnia to Iraq and Israel. The notion that IHH organizers would behave like radical leftist anti-Israel demonstrators on university campuses is simply ridiculous.

Moreover, there is Turkey's behavior to consider. Since Obama took office, Turkey's gradual slide into the Iranian axis has sped up considerably. Turkey's leading role in the flotilla, and the Erdogan government's ostentatious embrace of IHH which just a decade ago Turkey banned from earthquake relief efforts in light of its violent, jihadist mission made clear that the Erdogan regime would use the violence on board the ships as a way to strike a strategic blow at Israel's international standing.

In view of all of this, it is clear that Israel's information strategy for contending with the flotilla was ill-conceived. Rather than attack Turkey for its facilitation of terrorism, and openly prepare charge sheets against the flotilla's organizers, crew and passengers for their facilitation of terrorism in breach of both Israeli domestic law and international law, Israel's information efforts were largely concentrated on irrelevancies. Israeli officials detailed all the humanitarian assistance Israel has provided Hamas-controlled Gaza. They spoke of the Navy's commitment to use non-lethal force to take over the ships.

And now, in the aftermath of the lethal takeover of the flotilla, Israel's leaders stammer. Rather than demand an apology from the Turkish government for its support for these terrorists, Defense Minister Ehud Barak called his Turkish counterpart to talk over what happened. Rather than demand restitution for the terrorist assault against Israeli troops, Israel has defended its troops' moral training in non-violent crowd control.

These efforts are worse than worthless. They make Israel appear whiny rather than indignant. And more depressingly, they expose a dangerous lack of basic comprehension about what has just occurred and a concomitant inability to prepare for what will most certainly follow. Israel is the target of a massive information war. For Israel to win this war it needs to counter its enemies' lies with the truth.

The NPT has been subverted by the very forces it was created to prevent from acquiring nuclear weapons.

Hamas is a genocidal terrorist organization ideologically indistinguishable from al Qaida. International law requires all states and non-state actors to take active measures to defeat it.

Israel is the frontline of the free world. Its ability to defend itself and deter its foes is the single most important guarantee of international peace and security in the world. A strong Israel is also the most potent and reliable guarantor of the US's continued ability to project its power in the Middle East.

This is the unvarnished truth. It is also the beginning of a successful Israel campaign to defang and neutralize the massive coalition of nuclear proliferation- and terrorism- abettors aligned against it. But until our leaders finally recognize the nature of the war being waged against our country, these basic facts will remain ignored as Israel moves from one stunning defeat to the next.