Secretary of State Hillary Clinton said in a press conference that the United States would offer additional briefings and other information to China in hopes it can convince China that North Korea was responsible for torpedoing a South Korean warship in March.

There is a LOT of information packed away in that sentence, not much of it good. (From the Western perspective, anyway.) 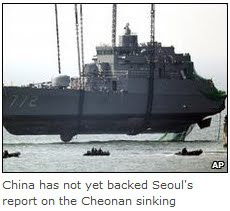 Clinton said a 400-page technical report on the sinking by an international team, including experts from the US, led to the “inescapable” conclusion North Korea was to blame and that action had to be taken.

Of course the conclusion was ‘inescapable’. Torpedoes aren’t zipping around the South China Sea like porpoises. It came from somewhere.

Clinton’s task isn’t to convince China that it was a North Korean torpedo. Beijing probably knew that before we did.

We hope China will take us up on our offer,” she told reporters in Seoul, where she was on a one-day visit. “I believe that the Chinese understand the seriousness of this issue and are willing to listen to the concerns expressed by both South Korea and the United States.”

The Korean War ended in a cease-fire in 1953. A state of war still exists between South Korea and her allies and the North and her allies. The chief belligerents were the same then as now, essentially Seoul/Washington vs. Pyongyang/Beijing.

But things are different now than they were then. In 1953, Maoist Communist China was a natural ally of Kim il Sung’s Stalinist Communist regime.

The modern Chinese economic powerhouse of 2010 finds little in common with North Korea - where it is still 1953.

Beijing has far more in common with Washington where trade between the two nations has fueled China’s transformation into the Next Big Thing in Western investment opportunities.

But Beijing is still tied by treaty and regional self-interest with the crazy little North Korean dictatorship. If nothing else, Pyongyang has kept the West slightly off-balance, giving Beijing an edge, one almost imperceptible to us but critical for them.

As long as the West’s attention is focused on Pyongyang, it isn’t focusing on Chinese issues like human rights and slave labor. Compared to North Korea, China is paradise on earth.

When Washington gets too pushy, Beijing can use Kim Jong il to push back indirectly, thereby accomplishing its will without jeopardizing China’s massive US trade imbalance so favorable to the Chinese bottom line.

Chinese influence in North Korea could be traded for international attention and influence elsewhere. If Seoul or Washington wanted to deal with North Korea or change Pyongyang’s behavior, it must first go to Beijing.

That is why China has been the centerpiece of the six-party talks on North Korea’s nuclear program. Still, Beijing understands what Washington does not.

Imagine an escaped serial killer from Death Row on the run. He is already facing execution - what does he have to lose?

Kim Jong il has the morality of the serial killer. Out of power, he’d have the life expectancy of Saddam Hussein.

He has nothing to lose - if warranted, he would think no more nuking Seoul’s 22 million inhabitants than he does starving his own people to support his own lavish lifestyle.

This is what Beijing understands that the Western world - and especially somebody like Hillary Clinton - cannot. Kim Jong il is Osama bin Laden with nukes - but Kim's 'cause' is Kim Jong il.

That’s part of the reason why Vice Foreign Minister Zhang Zhijun yesterday repeated a call for “restraint” by both sides and said China had no “firsthand information” on the sinking.

"China wants to avoid a conflict on the Korean peninsula, and is concerned that taking South Korea’s side may provoke North Korea into further escalations and even lead to war," said Shen Dingli, vice dean of the Institute of International Affairs at Shanghai’s Fudan University.

“China is doing the thing that best suits China’s interests and everyone’s interest,” Shen said. “China is not pushing the envelope either on the North Korean side to be aggressive or on the South Korean to punish North Korea with warfare.”

North Korea this week said it will cut all ties to the South in response to the findings of the panel.

According to a report in Bloomberg's Financial Times, Kim ordered his military to be combat-ready sending the Korean won down 3 percent against the dollar on May 25, the biggest one-day drop since March 30, 2009.

That’s a diplomatic way of saying that the North Korean leadership is just as nuts as is Kim Jong il.

China’s intervention in the Korean War was as much (if not more) about keeping the U.S. military from setting up bases along the Yalu River, the border between China and North Korea, as it was about helping out a Communist ally.

The traditional Chinese phrase “as close as lips and teeth,” which it uses to describe the relationship with North Korea, has a second line: “When the lips are gone, the teeth get cold.”

What China is really attempting to do is force Washington to accept a deal that will keep China’s teeth warm. China doesn’t want war with Washington over Kim Jong il - but when push comes to shove, it won’t give up its buffer zone along the Yalu River, either.

In the event Kim’s government is on the verge of collapse, or if war does break out, Beijing stands ready to topple Kim from within and install its own Korean leadership in Pyongyang.

That lets China keep its buffer state. It takes Kim Jong il’s finger off the nuclear button. The US gets to avoid a conflict and everybody is happy.

But for Beijing, that is the worst-case scenario. Right now, everything is under control and everything favors China. If China supports the US on sanctions, it risks reducing China’s influence over the North, which is bad for everybody.

But if China underestimates either its control over Kim or just how crazy Kim really is, the cost could be thirty thousand US troops stationed outside Seoul and Seoul’s 22 million native inhabitants.

So China is either our best friend. Or our worst enemy. AND it is neither - or both - at the same time.

Tension in Korea: A sunken ship, and talk of war - USA Today

Pyongyang is using front companies to export nuclear and missile technology to Iran, Syria and Burma - The Guardian