One day after Iran and Turkey announced an agreement in the hopes of thwarting any international economic sanctions against Iran, U.S. Secretary of State Hillary Clinton announced a 10-page resolution with new sanctions had just been agreed to by the five permanent members of the U.N. Security Council (the U.S., Russia, U.K., France, and China), plus Germany. That’s the good news: the world’s major powers didn’t completely cave into the Iranian regime’s latest round of deception and trickery. 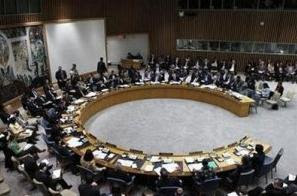 The bad news: the world’s major powers have mostly caved. The resolution abandons any hope for the “crippling sanctions” President Obama and Secretary Clinton once vowed to impose. Instead, we’re about to see another round of lame, toothless sanctions even as Tehran continues building the Bomb, prepares to annihilate the U.S. and Israel, and prepares for the arrival of the Twelfth Imam and the end of the world.

“This policy is unlikely to succeed,” said former U.N. weapons inspector David Kay at a panel discussion in Washington, reported AP. “The real question is what if sanctions fail? What are we to do?”

AP also reported that “Richard Perle, a former Pentagon official, said he doubted sanctions would be effective in stopping Iran and recommended the U.S. back the Iranian opposition as a way of pressing regime change.”

Even the New York Times noted in its story this morning:

“[E]ven if the Security Council adopts the new sanctions, it is unclear whether the provisions — including a mandate to inspect Iranian ships suspected of entering international ports with nuclear-related technology or weapons — would inflict enough pain to force Iran to halt its uranium enrichment and cooperate with international inspectors. None of the previous three sets of sanctions passed by the Council during the Bush administration succeeded in their goal: forcing Iran to end its enrichment of uranium and to answer the many questions posed by international inspectors related to their suspicions about Iranian research into nuclear weapons.

Some of the toughest proposals were barely even discussed as the United States sought support from China, which is a major trading partner with Iran and has been the most resistant to new sanctions. Along with the Russians, the Chinese blocked any measure that would stop the flow of oil from Iranian ports or gasoline into the country. President Obama himself had raised the possibility of such sanctions during the 2008 campaign.”

War is coming and once again the U.N. Security Council is doing precious little to stop it.

God help us all.

Threat of war across region is unspoken realization - Financial Times