Thankfully, Al Qaida has failed to accomplish a major terrorist attack in America since 2001. However, the jidahist organization has continued its destructive activity around the world and has fought to undermine the stability of young post-Saddam Iraq through acts of terror. Despite the tenacity of Al Qaida's disciples, however, victories are being won. 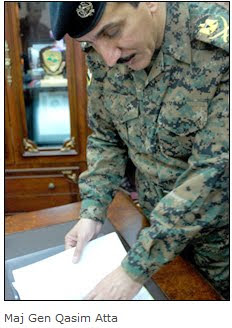 South Africa: On Monday, Iraqi security chief Major General Qassim Atta announced that al-Qaida planned to commit a terrorist attack at the World Cup, pushing South African security personnel into high alert. The United States has the Super Bowl. The rest of the world watches the FIFA World Cup - the premier competition of the other football. From June 11 to July 11, 2010, soccer enthusiasts will follow as the world's best teams battle it out in ten different venues from Cape Town to Durban across South Africa.

South African authorities have been working to straight-jacket the nation's violent crime problem ahead of the World Cup. Security precautions have been implemented to protect the sports event from terrorist attacks, but Monday's announcement from Iraq shifted South Africa's security focus. Reportedly an al-Qaida operative in the custody of the Iraqi security forces, Abdullah Azzam Salih Misfar, admitted that a major terrorist attack was planned for the World Cup, and the impetus went all the way up to al Qaida's second highest leader, Ayman al-Zawahiri.

Tuesday, however, Misfar contradicted the Iraqis' announcement, saying that he had merely passed on a suggestion to the al-Qaida leadership, but no World Cup terrorist plot had actually come to fruition. He hadn't ever talked to al-Zawahiri, he said, but had just passed on his idea through other al-Qaida officials. He never heard back about it.

"I wrote the idea and sent it to Abu Hamza," Misfar said. "It was relayed through other men, but I didn't get a reply."

al-Qaida in Iraq: According to Misfar, al-Qaida in Iraq is not doing very well. A number of senior operatives have been killed or arrested since the capture last month of Munaf al-Rawi, whom Misfar called the Baghdad chief. Al-Rawi was an al-Qaida gopher through whom many messages were exchanged, and his capture has proved disasterous for al-Qaida. The jihadists are already weakened and short on funds; Misfar has linked al-Qaida with robberies of gold stores in Baghdad.

Al-Qaida has continued to keep a firm face, however. The alleged head of Islamic State of Iraq (an extremist Sunni organization considered an umbrella organization for al-Qaida), Abu Omar al-Baghdadi, and the leader of al-Qaida in Iraq, Abu Ayyub al-Masri, were both killed in a raid in Baghdad last month. In an effort to prove it's still kicking, al-Qaida has succeeded in a number of bombings since the March elections and has announced replacements for its slain leaders. ISI's new "war minister" al-Nasser Lideen Allah Abu Suleiman declared war against Iraq's military and police and said the ISI would give the Shiites, "a long gloomy night and dark days colored in blood."

Al-Qaida's forces in Iraq are weakened and struggling to hang on. Their forces are small and their leaders continually get knocked down by the Iraqi and American security forces. They are not invincible. At the same time, this beaten bunch has remained determined and has refused to give up. New recruits also keep pouring in across the Syrian border, despite efforts to keep the border's many ravines guarded and blocked.

As they fight these bloody men, the security forces of Iraq can learn a valuable lesson; they need to be even more resolute than the terrorists. Al-Qaida is merely made up of human beings - human beings who often talk bigger than they can act.