Lest We Forget [Who Owns] Jerusalem

It is not all that unusual for an Israeli politician to garnish his or her speeches with a verse or even two from the Bible (the Tanach or “Old Testament.”) Religious and non-religious Jew alike will dip into the most famous and cherished Hebrew-language original to underscore a message to their people.

Prime ministers have also used the Bible to encourage Christian visitors to Israel to continue and increase their support of the Jewish state.

Somewhat less common is the practice of using the scriptures in the Knesset (Israeli parliament) to buttress one side of a political debate.

When, on Jerusalem Day last week, Israeli Prime Minister Benjamin Netanyahu dared reference the Holy Book in defense of the Jews’ claim to the city, the response was predictably harsh.

According to Reuters, Netanyahu told a parliamentary session commemorating the 1967 return of Jerusalem to Jewish control that “Jerusalem” and its alternative Hebrew name “Zion” appear 850 times in the Tanach.

“As to how many times Jerusalem is mentioned in the holy scriptures of other faiths, I recommend you check,” he said.

But when an Arab Knesset member challenged him, the news wire reported:

Netanyahu “offered a lesson in comparative religion from the lectern.”

The indisputable fact was too much for PLO chief negotiator Sa’eb Erekat, who fired off this sanctimonious response:

“I find it very distasteful, this use of religion to incite hatred and fear,” said the man whose organization has a long and unbroken record of stirring hatred, and perpetrating and “justifying” acts of terrorism with references from the Quran. 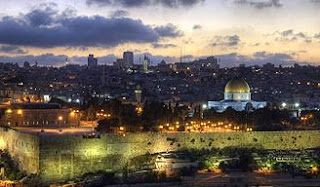 Netanyahu was quite correct in saying that there is not a single mention of Jerusalem in the Quran, whereas the Bible mentions the city nearly 1000 times.

Using an online Bible with a search engine, I sought to determine not just how many times this city is mentioned, but what is actually said about Jerusalem on some of these pages. This is what I learned:

That in 1004 BC(E), the Israelite king, David, overthrew a Jebusite stronghold located in the southern mountainous region of the land of Canaan, and relocated his throne from Hebron to the conquered city, Jerusalem, which he called the City of David. (2 Samuel 5)

David reigned over the entire nation of Israel from Jerusalem for 33 years. His son Solomon did likewise for another 40 years.

Because of Solomon’s sin, God tore away most the kingdom from his son. Nonetheless, Jerusalem remained the capital of the southern kingdom of Judah (thus of the Jewish people), and a son of David sat on the throne in that city until a total of 418 years had passed from David’s conquest.

The LORD God of Israel had told David and Solomon that “in this house and in Jerusalem, which I have chosen out of all the tribes of Israel, I will put My name forever…” (2 Kings 21:7)

God had promised that, “for the sake of Jerusalem which I have chosen,” He would keep the tribe of His servant David and give the city to a son of his. (1 Kings 11:13)

For: “Nevertheless for David’s sake the LORD his God gave him a lamp in Jerusalem, by setting up his son after him and by establishing Jerusalem…” (1 Kings 15:4)

During this period, no fewer than 19 kings in David’s bloodline would rule from Jerusalem. (2 Samuel, 1 and 2 Kings, 1 and 2 Chronicles and the Psalms)

So we have it that, from David’s establishment of the city until its destruction by the Babylonians in 586 BC(E), Jerusalem was the capital of the Jews.

Their captivity in Babylon lasted 70 years, during which they mourned for their destroyed capital and temple and prayed fervently to return. They also vowed there, in exile, that they would never forget Jerusalem. (Psalm 137)

While in captivity the prophet Daniel prayed concerning Jerusalem:

“O Lord, according to all Your righteousness, I pray, let Your anger and Your fury be turned away from Your city Jerusalem, Your holy mountain; because for our sins, and for the iniquities of our fathers, Jerusalem and Your people are a reproach to all those around us…” (Daniel 9)

Beginning in 538 BC(E), during the reign of the Persian King Cyrus, the first exiles made their way back under Zerubbabel, and began to rebuild Jerusalem. Between 520 and 516 they rebuilt the temple, restoring the city to the center of Jewish worship and service to God. Circa 458 BC(E), during the reign of King Artaxerxes, another wave of Jews was permitted to return to Jerusalem under the leadership of Ezra. (Ezra 1-7)

“And they issued a proclamation throughout Judah and Jerusalem to all the descendants of the captivity, that they must gather at Jerusalem…” (Ezra 10:7)

Later, when Nehemiah was overseeing the rebuilding of the city wall, representatives of other nations – Sanballat the Horonite, Tobiah the Ammonite and Geshem the Arab tried to stop them. Nehemiah’s answer to them was unequivocal:

“The God of heaven Himself will prosper us; therefore we His servants will arise and build, but you have no heritage or right or memorial in Jerusalem.” (Nehemiah 2:18)

Lots were then cast to decide which one out of every 10 men who returned from exile would make Jerusalem their home. (Nehemiah 11)

While it is true that the Davidic Dynasty was not continued upon their return, and in fact that the ensuing centuries saw hardly a single Jewish king ruling from Jerusalem – the Jews’ political leaders continued to use the city as the seat of government, and Jews flocked to Jerusalem from around the country and the known world to celebrate the three appointed biblical feasts. For the Jews, Jerusalem remained the capital from 538 BCE to AD 70 – even under Roman occupation.

In the year AD 135, Jerusalem was flattened, and every last Jew finally driven from it. The Jews were also banned from entering the pagan city of Aelio Capitolina which the Emperor Hadrian built in Jerusalem’s stead.

By that time Jerusalem had been this nation’s capital for a total of 1091 years.

It was Rome’s avowed aim to eradicate every last Jewish link to, and interest in, Jerusalem. But what was achieved was the opposite. For the next 1832 years, wherever they were scattered on the face of the planet, and in the face of often-extreme persecution and suffering, the Jews clung to the belief in their return.

According to the Jewish prophets, a son of David would one day be restored to David’s Throne in the city of that great king. (Jeremiah 30; Amos 9)

Ezekiel too saw in a vision the glory of God, which had departed prior to the destruction of the Temple, returning to Jerusalem and entering the again-rebuilt Temple of God. (Ezekiel 43 and 44) There the Almighty again declared Jerusalem to be the place of His throne and of His footstool.

The Psalmist prophesied that there was a “set time” in the future when God would have mercy on Zion, favor Jerusalem, build up the city and then appear in His glory. When He does this, the nations of the world will fear and serve Him. (Psalm 102:12-22)

Isaiah declares that in the “latter days” the temple will be established anew in Jerusalem, from where God’s word would go out to all the nations of the world. (Isaiah 2)

It is in Jerusalem and on Mount Zion (the Temple Mount) that the Lord will reign in glory. (Isaiah 24)

Who is this LORD? Is it the Muslim god Allah? Emphatically not! He calls Himself the LORD God of ISRAEL. In Hebrew it is Yud-Heh-Vav-Heh (YHWH). It is a name and a title that He does not change.

We read on in Isaiah how this God will defend Jerusalem from all the nations that come against her. (Isaiah 31)

Later the prophet tells us that God has set watchmen on the walls of Jerusalem; they are commissioned to petition the Almighty on behalf of the city until it is established as a praise in all the earth. (Isaiah 62)

God plans to rejoice in Jerusalem and joy in His people Israel. (Isaiah 65)

“At that time Jerusalem shall be called The Throne of the LORD, and all the nations shall be gathered to it, to the name of the LORD, to Jerusalem. No more shall they follow the dictates of their evil hearts. In those days the house of Judah shall walk with the house of Israel, and they shall come together out of the land of the north to the land that I have given as an inheritance to your fathers…” (Jeremiah 3:17-18)

The Jewish people and their land will be saved, and Jerusalem will live safely. (Jeremiah 33)

Joel – another Jewish prophet, foretells that God will make Jerusalem a place of safety and deliverance (Joel 2). And through him God says that, “at that time, when I bring back the captives of Judah and Jerusalem” He will also gather together the nations and enter into judgment against them for the way they have treated His people and the land which He gave to them. It is at Jerusalem that this judgment will take place. (Joel 3)

Through Zechariah God describes that He is “zealous for Jerusalem with great zeal.” Therefore, He continues, “I am returning to Jerusalem with mercy; My house shall be built in it. … The LORD will again comfort Zion, and will again choose Jerusalem.”’” (Zechariah 1)

Again, this is “the LORD of hosts,” the God of Israel. It is not Allah, the god of the Muslim.

“Sing and rejoice, O daughter of Zion! For behold, I am coming and I will dwell in your midst,” says the LORD. “Many nations shall be joined to the LORD in that day, and they shall become My people. And I will dwell in your midst. Then you will know that the LORD of hosts has sent Me to you. And the LORD will take possession of Judah as His inheritance in the Holy Land, and will again choose Jerusalem. Be silent, all flesh, before the LORD, for He is aroused from His holy habitation!” (Zechariah 2)

“Thus says the LORD: ‘I will return to Zion, and dwell in the midst of Jerusalem. Jerusalem shall be called the City of Truth, the Mountain of the LORD of hosts, the Holy Mountain.’

“Thus says the LORD of hosts: ‘Old men and old women shall again sit in the streets of Jerusalem, each one with his staff in his hand because of great age. The streets of the city shall be full of boys and girls playing in its streets.’ …

“Thus says the LORD of hosts: ‘In those days ten men from every language of the nations shall grasp the sleeve of a Jewish man, saying, “Let us go with you, for we have heard that God is with you.”’”

Which nation was God determined to punish when their fathers provoked Him to wrath? Israel.

Which nation did God promise to return to the Land of Israel from all the lands to which He scattered them? Israel.

Which nation does He restore to Jerusalem, before judging the rest of the nations concerning their treatment of this nation and its land? Israel.

I could carry on and on. SO FULL is the Bible of references to Jerusalem, to its rightful people and to their God.

Sa’eb Erakat may find this distasteful, but as a Muslim, and as a spokesman for millions of Muslims who hate Israel and wish to appropriate Jerusalem for themselves, he worships the wrong god, one who has no power to take Jerusalem from the Jews.

Hey, his god doesn’t even care about Jerusalem! Allah’s total lack of reference to this city in their “holy” book makes this clear.

Jerusalem belongs to Israel – exclusively and for always.

Now, if only its leaders would reference the Bible when it comes to the other critical issues they have to deal with – like the right to the Land of Israel – all of it.

Daniel: On the Times of the Gentiles - BPT (Dr. David R. Reagan)