Thousands of soldiers from Great Britain, France, and the United States - World War II allies of Russia - marched together in Moscow's Red Square to mark 65 years since the defeat of the Nazis in a historic military parade, the countries largest since the collapse of the Soviet Union. Israeli Prime Minister Shimon Peres attended the ceremony along with leaders from more than a dozen countries including the president of China, the German Chancellor Angela Merkel, and the heads of state of almost every former Soviet Union nation.

Russian President Medvedev told a crowd of thousands in Moscow's Red Square that 65 years ago Nazism was defeated and a machine that was exterminating millions of people was halted because there was one choice - victory or become slaves. 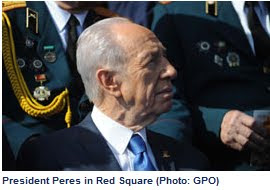 The large military parade held in Moscow's Red Square to mark the defeat of Nazism has a unique twist in history and in the future according to Bible prophecy.

In the largest military parade held in Moscow's Red Square since the fall of the Soviet Union both the Russian military and western allied military units marched to mark the defeat of Nazism at the beginning of the end of World War II. The media reported that 10,000 Russian troops and over 120 military aircraft took to the skies in a highly choreographed military display. This display of victory over the Nazi regime of Adolf Hitler marked the turning point of World War II and the halt of the extermination of millions of people. Even the Israeli President Shimon Peres voiced his thanks to the Russian people for helping to stop the murder of millions of Jews.

However, there is an ironic twist to this celebration as is revealed in Bible prophecy. As any student of Bible prophecy understands according to Ezekiel 38 there will be an alignment of nations that will in the last days endeavor to eliminate the Jewish state in the Middle East. According to Ezekiel 38:2 the Magog listed in this passage could only be the nation of Russia today. They will be the leader of this coalition of nations to come against Israel. Ironically the recent military parade in Moscow's Red Square was a reminder of the past but also a reminder of what will happen in the future when Bible prophecy will be fulfilled.