On June 7, 1967 the Israeli Defense Force captured the Old City of Jerusalem during the Six Day War and reunited this sacred city after almost 2000 years, giving the Jews access to the Temple Mount, the most sacred piece of real estate in Judaism.

As the Jewish people mark the 43rd anniversary, not on June the 7th but on the date on the Jewish calendar, that coincides with that historic time; there is the reality that the reunification of Jerusalem is still a major question mark and a growing controversy. Both the Obama administration and the European Union have applied pressure to the Israeli government to once again divide Jerusalem into the capitals of the two states, Israel and Palestine which puts in jeopardy the often quoted description of Jerusalem as the undivided eternal capital of the Jewish people. 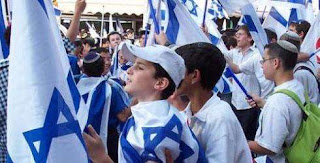 The reunification of the city of Jerusalem in 1967 caused celebration among the Jews around the world but it also set the stage for controversy surrounding Judaism's most sacred piece of real estate, according to Bible prophecy.

As the Jewish world celebrates the reunification of their sacred city, Jerusalem every year since 1967. They also continue to watch how this unique city becomes more controversial. Political leaders from around the world continue to call for the city to be redivided in order to accommodate the Palestinians and their desire to have at least a portion of Jerusalem as the capital of their hoped-for state of Palestine.

This scenario that is being played out today,was foretold thousand of years ago. Jesus in His Olivet Discourse, found in Luke 21:24 stated that Jerusalem would be trodden down by the Gentiles, that's non-Jewish world leaders, until He returned to earth to liberate the city.

The prophet Zechariah also spoke of the city of Jerusalem, as the center of controversy, that's Zechariah 12:2. Zechariah 1:14-16 spoke of the Lord being aggressively possessive of Jerusalem, displeased with those non-Jews who tried to control it and the prophet revealed that Jesus Christ will one day come to Jerusalem to build His Temple there to dwell among His people forever.

Jerusalem Day celebrations are indeed a reminder that Bible prophecy will be fulfilled.

Netanyahu: ‘We will continue to build’ in Jerusalem - JTA

Netanyahu turns to Bible in tussle over Jerusalem - Reuters