We know now that the car bomb in Times Square was an attempted Islamic jihad attack. But the mainstream media, following its usual pattern, is once again denying, minimizing, or obfuscating this fact.

Writing in The Nation on Monday, Robert Dreyfuss epitomized the mainstream media’s hope that the car bomber would turn out to be a right-wing extremist:

“It may be that the Pakistan-based Taliban, the Tehrik-e Taliban Pakistan (TTP), has quietly established a Connecticut franchise while we weren’t looking. That’s possible. But it seems far more likely to me that the perpetrator of the bungled Times Square bomb plot was either a lone wolf or a member of some squirrely branch of the Tea Party, anti-government far right. Which actually exists in Connecticut, where, it seems, the car’s licence plates were stolen.”

In reality, according to Pakistani authorities, Faisal Shahzad, the would-be car bomber, attended a jihad training camp in that country. He spent five months in Pakistan recently, including some time in Peshawar, a center of Al-Qaeda and Taliban activity. A Pakistani Taliban group claimed responsibility for the attack — a claim that American authorities immediately dismissed, but which gained a new claim to serious consideration when Shahzad’s Pakistani connections were revealed. 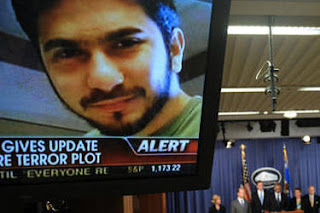 Shahzad parked his explosives-laden SUV outside the offices of Viacom, the parent company of Comedy Central, which presents South Park, the cartoon whose creators were just threatened with death by Islamic supremacists in New York for daring to lampoon Muhammad. The Muslim group that issued the threat, Revolution Muslim, was proselytizing in Times Square just hours before Shahzad’s car bomb was discovered.

Yet for all this, virtually no media reports are saying anything about Shahzad being a Muslim. Such a reference, however, would hardly be gratuitous: Islamic jihad theology and the death penalty enshrined in Islamic law for anyone who insults Allah or Muhammad are the most likely keys to Shahzad’s motivation. But the politically correct, multiculturalist imperative demands that Islam and Muslims, being (at least in this addled view) non-white and non-Western, must always be portrayed as victims, no matter how imaginative the lengths to which analysts must go in order to find something, anything, to blame for the carnage other than Islam’s doctrines of hatred of and violence against unbelievers.

Ezra Klein in the Washington Post led the way in the imaginative department. Observing that Shahzad defaulted on the mortgage on his home in Connecticut and that the property is now in foreclosure, Klein discovered a hitherto-unnoticed motivation for violent jihad:

“foreclosures generate an enormous amount of misery and anxiety and depression that can tip people into all sorts of dangerous behaviors that don’t make headlines but do ruin lives. And for all that we’ve done to save the financial sector, we’ve not done nearly enough to help struggling homeowners.”

MSNBC’s Contessa Brewer, meanwhile, may not have had to face the heartbreak of foreclosure, but she had her own reason to feel “an enormous amount of misery and anxiety and depression”: what got Brewer down was that Shahzad turned out to be a Muslim. “There was a part of me,” lamented Brewer once the perpetrator was identified, “that was hoping this was not going to be anybody with ties to any kind of Islamic country.”

Brewer explained that she hoped that Shahzad’s action would not give rise to a resurgence of what she called “outdated bigotry” – voicing the common mainstream media preoccupation with a “backlash” against innocent Muslims. This preoccupation manifests itself in a flood of articles about Muslims fears of this “backlash” every time there is an attempted or successful jihad terror attack in America or Europe; the only thing that never appears is the backlash itself, which remains more a figment of the Leftist media’s imagination than an actual threat against innocent Muslims.

Nonetheless, New York Mayor Michael Bloomberg was likewise preoccupied with this phantom threat of a backlash, warning New Yorkers several times of any action against Muslims or Pakistanis. Bloomberg ought to be ashamed of himself. He should have been making statements about protecting Americans of all creeds, and calling the Muslim community in America to account for its tolerance of jihadists. There has never been a backlash against innocent Muslims in the U.S. It is a fiction that we only hear about when a Muslim plots mass murder of Americans. And then we hear about it endlessly, as if Muslims were the victims rather than the perpetrators.

Faisal Shahzad and his car bomb is yet another indication of the tenacity and persistence of the jihad against the United States – and of the continuing and even hardening resistance of American officials to the elementary step of even admitting that jihad is being waged.

How did Shahzad escape Homeland Security’s notice for so long? - Hotair.com