Who Is Ban Ki-Moon?

The post of UN Secretary General offers one man the ability to mightily influence the world. It is therefore a good idea to know more about the person who sits in that seat. Today we're going to turn our attention to Secretary General Ban Ki-moon of Korea, who succeeded Kofi Annan in 2007.

Ban Ki-moon was born in small farming village in Northern Korea’s Chungcheongbuk-do in 1944 to a middle-class warehouse owner. He was raised for a short time in Chungju, until the Korean War sent his family fleeing into the rural mountain regions for safety.

Always ambitious and studious, Ban excelled at his studies, particularly the English language, and graduated in 1970 from the University of Seoul, where he holds a BA in International Relations. He earned the highest possible score in the Korean Foreign Service Examination after his graduation from university. Ban went on to study at the John F. Kennedy at Harvard and earned his Masters in Public Administration.

Ban met his wife Yoo Soon-taek in high school in 1962 when he was eighteen, married in 1971, and the two have three grown children. Chief Ban speaks Korean, English, and French, among other languages. He additionally holds honorary Doctor of Law degrees from the University of Malta and the University of Washington in the US. 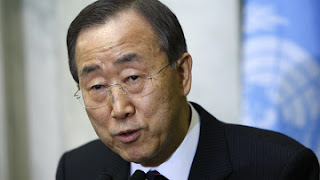 In 2001, Korean powers fired Ban from his position because of his controversially positive statements regarding Russia’s stance on the Anti-Ballistic Missile Treaty, statements that were at odds with American government viewpoints. In 2001, Ban was surprised to be rescued from political exile by an appointment to a high-profile position: Chief of Staff to UN General Assembly President. The year 2004 saw Ban’s selection to Foreign Minister of Korea. He faced a year of tumult riddled with Islamic extremist interference, a deadly Indian Ocean tsunami, and North Korean nuclear talks.

Ban is known among peers and to press as a regimented, orderly, humble and private individual with an calm, inscrutable demeanor and high ethical standards, though the Korean press corps calls him "the slippery eel" because of his skill at dodging difficult questions. The Secretary declines to comment publicly regarding his religious beliefs or affiliation, citing that diplomatic concerns are better served without such personal inclinations becoming general knowledge.

Mr. Ban is currently on an official tour of Central Asia’s former Soviet nations to commend current leaders on recent diplomatic agreements, especially championing de-nuclearization and open international relations. While climate change and environmental stewardship are top on his list of priorities, Ban also focuses on human rights issues, including eliminating human trafficking and death penalties, and providing health care to prevent the spread of pandemic diseases such malaria, HIV, polio, and flu viruses. It is interesting to note that Ban, contrary to the UN's normal position on the death penalty, refused to condemn the execution of Saddam Hussein, which took place on December 30, 2006, two days before Ban took office.

While Ban appears to deal with the world powers in an even-handed manner, he has frustrated the Israeli government. In tours of Israel, he has insisted that Hamas halt its missile fire on Israel, but has also repeatedly echoed the international community’s insistence that Israel immediately cease all ongoing housing construction within East Jerusalem and re-open travel between Palestine and the outside world. Ban has apparently also not answered Israel’s concerns that Iran is not only developing its nuclear capabilities, but constructing smuggling tunnels into Israeli territory.

Secretary Ban does not come off as controversial, head-strong, or alarming, and appears to have strong ethical standards. He does not appear to actively, outwardly seek the approval of national figureheads, and does not seem to operate on any pet agendas for his personal gain. However, his quiet demeanor has led critics to argue that he does too little and shows too little leadership. Last year Jacob Heilbrunn wrote in Foreign Policy that Ban is a "Nowhere Man," saying:

"But at a time when global leadership is urgently needed... the former South Korean foreign minister has instead been trotting the globe collecting honorary degrees, issuing utterly forgettable statements, and generally frittering away any influence he might command. He has become a kind of accidental tourist, a dilettante on the international stage."

An internal memo by Deputy Ambassador to the United Nations Mona Juul, a high-ranking Norwegian diplomat, to Norway's Foreign Ministry last August echoed Heilbrunn, saying that Ban was doing very little to make the UN relevant. For those who want the United Nations to succeed in bringing peace and cooperation between the countries of the world, Ban's lack of leadership is a frustration. For those who have long seen the UN as a mediocre non-entity anyway, Ban just seems like a quiet, gentle fellow.

Being There: U.N. Chief Takes a Rights Message to the Doorstep of Autocrats - Reuters India (Blog)