Given its historical track record, if the government really wanted to help get the economy moving again, it would disband itself, like the old Soviet Union did.

President Obama promised to ‘fundamentally change America’ without raising taxes by placing the financial burden for America’s makeover on the top two percent of wage-earners. 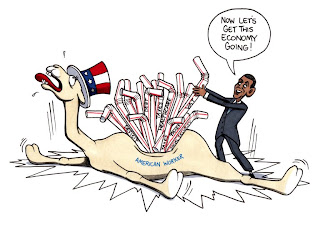 He promised throughout his campaign that he could accomplish the government takeover of essential services without raising taxes on ‘ordinary Americans by one thin dime’.

There is an old adage to the effect that ‘promises are made to be broken’ but puh-leeze!

Obama’s chief economic advisor is Paul Volcker. Volcker is the perfect choice. Paul Volcker was appointed in 1979 as Chairman of the Federal Reserve – by Jimmy Carter.

Volcker’s first official act as Fed Chairman was to raise the prime rate for federal funds (the rate banks charge each other for short term loans) from 11.2% in 1979 to the 21.5% level it had reached by the time Ronald Reagan took office in 1981.

For those of you who don’t remember, here’s what that means, using 2010 housing prices for clarity.

What do you get for the extra nearly four hundred dollars per week? You get to still live there - but eating is optional.

Reagan eventually fired Volcker in 1987 and replaced him with Alan Greenspan. But last year, Obama pulled Volcker out of mothballs and appointed him the first Chairman of Obama’s "Presidential Economic Recovery Advisory Board."

Fortunately, Volcker doesn’t have the power to raise interest rates independently, like he did as Fed Chairman. But he does have the authority to recommend other ways of separating Americans from their money.

Obama promised not to tax anyone making less than $250K a year, then it was $200K, then it was $100K – Volcker’s VAT idea will not just hit the poor, it will even tax kids cutting lawns on weekends.

Volcker is proposing the introduction of a VAT (“Value Added Tax”) which is sort of like a national sales tax, but far more insidious. A VAT tax adds taxes to a product at every stage of its manufacture, distribution and sale.

Then when you buy it, you end up paying all the taxes that have been levied on it and buried in the final price before it got to the showroom, PLUS a national sales tax due at point of sale.

Here’s how that works in practice. Canada has a hidden VAT plus a national federal sales tax on top, like Volcker is proposing.

The same car lists at GM in the States for $21,825 to $26,855. At the high end, the drive-away difference is almost TEN THOUSAND DOLLARS. It isn’t the currency exchange – at the moment, a Canadian Looney is worth more than the US greenback.

The ten thousand dollar difference? Those are the VAT taxes that help to pay for Canada’s “free” health care - it doesn't cover the whole cost, but without it, paid, universal health care would be impossible.

A VAT tax also permits the taxing of taxes. VAT Taxes are ‘hidden’ in the sense that by the time the finished product gets to you, it has been taxed a half-dozen times and the taxes rolled into the MSRP.

When you pay the final consumer sales taxes, they are calculated with all the other taxes rolled in, meaning you will pay a tax on the taxes already paid.

When a gallon of gasoline was $2.00 in the US, it was $3.68 a gallon in Canada. In general, although the currencies are virtually at the same level, everything a Canadian buys costs about 30% more than his American counterpart.

If the Obama administration had come to power with the deliberate intention of destroying the national economy, they would be doing exactly what they have been doing since coming to power last year.

It is almost eerie. At the same time the administration is strangling the American economic engine, it is systematically dismantling its strategic defense policies.

The administration announced that it would NOT use nuclear weapons in self-defense, even in the event of a biological or chemical attack on an American city.

Under the policy, the U.S. will not launch a nuclear attack against any country that signs the Nuclear Non-Proliferation Treaty and abides by it.

The strategy allows the use of nukes against rogue states like Iran or North Korea, but only under ‘extreme circumstances’ – whatever that means. To be fair, the administration left itself a number of ‘loopholes’ but the announcement itself is bizarre.

Like Wyatt Earp trying to defuse the Gunfight at the OK Corral by saying, “Go ahead and draw. Maybe I’ll draw, and maybe I won’t.”

And no matter who the administration might consider using nukes on ‘under extreme circumstances’ - the targets will in no way be Islamic.

According to the White House;

“The change is a significant shift in the National Security Strategy, a document that previously outlined the Bush Doctrine of preventative war and currently states: "The struggle against militant Islamic radicalism is the great ideological conflict of the early years of the 21st century."

In January 2009, we discussed the projections of a Russian futurist by the name of Igor Panarin. Panarin is a professor at the Diplomatic Academy of Russia's Ministry of Foreign Affairs.

According to Panarin, around the end of June 2010, or early July, he says, the U.S. will break into six pieces - with Alaska reverting to Russian control. He predicts that economic, financial and demographic trends will provoke a political and social crisis in the U.S.

When the going gets tough, he says, wealthier states will withhold funds from the federal government and effectively secede from the union. Social unrest - and possibly even civil war - will follow.

The U.S. will then split along ethnic lines, and foreign powers will move in, Panarin predicted. California will form the nucleus of what he calls "The Californian Republic," and will be part of China or under Chinese influence.

Texas will be the heart of "The Texas Republic," a cluster of states that will go to Mexico or fall under Mexican influence.

Washington, D.C., and New York will be part of an "Atlantic America" that may join the European Union. Canada will grab a group of Northern states that Professor Panarin calls "The Central North American Republic."

Hawaii, he suggests, will become a protectorate of Japan or China, while Alaska will be subsumed into Russia.

In retrospect, those predictions seem kind of obvious – the handwriting was already on the wall by 1975 – it was obvious that the Soviet Union couldn’t afford to continue the arms race.

Whether the collapse would come was not in doubt among Sovietologists – the only unanswered question was when. When I first reported the Panarin story, I was skeptical.

But at the same time, it would be difficult to argue that such a scenario isn't possible. After all, in 1989 when George H. W. Bush was being sworn into office, nobody would have predicted the collapse of the Soviet Union within two years. But in 1989, nobody would have said it was impossible, either.

That was my assessment on January 2, 2009, eighteen days before Barack Obama assumed the presidency.

What do I think now? I’m still not sure, but it sounds less and less far-fetched as the Obamanation moves forward. Like the Soviet Union, the handwriting is on the wall.

It can't hope to win a war against an enemy it dare not name for fear of angering him. It cannot expect its nuclear arsenal to protect it from attack if the enemy knows it won't use them.

And it cannot survive if it cannot redeem its outstanding international debt and cannot borrow more.

What I do know that is the Bible envisions just four spheres of global power during the Tribulation Period – and none of them resemble an America that we recognize.

“And when these things begin to come to pass, then look up, and lift up your heads, for your redemption draweth nigh.” (Luke 21:28)

No nukes not good news - The Washington Times