Terrorists in the Gaza Strip claimed to WND they test-fired a rocket two weeks ago capable of traveling 31 miles, putting Israel's nuclear plant within reach.

If their claim is correct, it would mark a major and dangerous escalation of Palestinian rocketing capabilities.

Members of the Islamic Jihad group told WND they launched a rocket two weeks ago from the northern Gaza Strip into the Mediterranean Sea off the coast of the Israeli town of Ashdod. The jihadists said they fired the rocket into the sea intentionally to test its range. 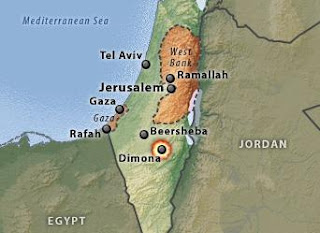 The Islamic Jihad members claimed the rocket traveled 50 kilometers, or 31 miles. Israel's Dimona nuclear plant is about 50 kilometers from Gaza.

A spokesman for the Israel Defense Forces would only confirm to WND that a rocket landed in the sea two weeks ago but would not comment on the distance the rocket traveled.

Last January, an Egyptian intelligence official told WND he would not be surprised if Hamas has a number of rockets in the Gaza Strip capable of reaching Israel's main nuclear power station.

The official's estimates, which could not immediately be confirmed by Israeli defense sources, are significant since Hamas routinely smuggles weaponry in tunnels that snake underneath the Gaza-Egypt border. He said he believes Hamas could have rockets that can reach Israel's nuclear plant in Dimona.

Hamas is known to possess 122 mm Katyusha rockets, which have a range of about 18 miles, and has fired improved 122 mm Katyusha's, with ranges of up to 30 miles. The Egyptian intelligence official said Hamas may be saving larger, 220 mm rockets, with ranges in the vicinity of 44 miles, which would place both Dimona and Tel Aviv within range.

Israeli officials say Hamas is thought to have also acquired dozens of Iranian-made Fajr-3 missiles with an even longer range.