The Jewish state of Israel stood for 2 minutes in silence when the nationwide siren sounded to mark Holocaust Remembrance Day and they remembered the 6 million Jews that were slaughtered in the Holocaust of World War II some 65 years ago. Israeli Prime Minister Netanyahu said never again will Jews allow such a horrific crime to take place and the world today must do all that is possible to stop it from being repeated - referring to the radical leader of Iran, President Ahmadinejad who continually calls for the Jews to be wiped off the earth. 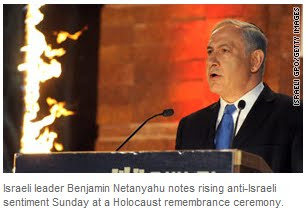 As Israel marked Holocaust Remembrance Day and read the reports of the increase and spread of anti-semitic activities across the world, the Jewish world must realize that the worst holocaust is yet to come according to Bible prophecy.

During World War II, Adolf Hitler and his Nazi troopers led the way to the slaughter of 6 million people who were guilty of only one thing - they were Jewish. The annual Holocaust Remembrance Day in Israel is for the purpose of remembering all the victims of that tragic event in history but also to say to the world that never again will this happen.

However, the reality is that there will be another holocaust worse than the last one, that is according to Bible prophecy. The ancient Jewish prophet Zechariah wrote 2500 years ago that during the Time of Jacob's Trouble, the coming seven years of judgment - the Tribulation, that during that time two out of every three Jews will be killed (Zechariah 13:8). At the world's present Jewish population, that would mean over 8 million Jews will be slaughtered. Our world today is witnessing an increase in anti-semitic attacks and world leaders like Iranian President Ahmadinejad will play a key role in this horrific crime on humanity.

In the prophetic book of Revelation, we see revealed the prophecy of Satanic forces who will be thrown from heaven to the earth (Revelation 12:7-17) and they will join in that holocaust of the future as they attack Jews to eliminate them from the earth.

As Israel marked Holocaust Remembrance Day this year, one must remember that Bible prophecy will be fulfilled.

What is the time of Jacob’s trouble? - GotQuestions.org

The Amazing Claims of Bible Prophecy: What You Need to Know in These Uncertain Times - Mark Hitchcock (Book)