The threat of a regional war involving Syria, Lebanon, Hezbollah and Israel is more ominous today that it has been at any time since the end of the brief summer war of 2006. The hair-trigger this time involves the reported Syrian delivery of WMD-capable SS-1C "Scud-B" ballistic missiles or, according to anonymous Israeli sources the SS-1E "Scud D," to the Shi'a terrorist organization Hezbollah in Lebanon. 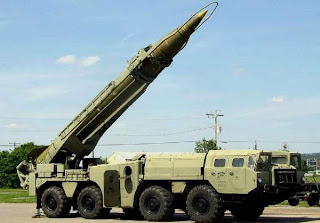 On Tuesday, 13 April 2010, Israeli Defense Minister Ehud Barak went public in confirming the stunning news that the governments of Syria and Lebanon were in blatant and deliberate violation of United Nations Security Council Resolution 1701 which brought a tenuous end to the Israel-Hezbollah war of July-August 2006. The bombshell news first reported by the Kuwaiti Al-Rai news agency was that Syria was in the process of transferring Scud ballistic missiles to Hezbollah in Lebanon.

Item 8 of UNSCR 1071 called for "no sales or supply of arms and related materiel to Lebanon except as authorized by its Government," and Item 14 called for "the Government of Lebanon to secure its borders and other entry points to prevent the entry in Lebanon without its consent of arms or related materiel," and Item 15(a) which decided "all States shall take the necessary measures to prevent, by their nationals or from their territories ... The sale or supply to any entity or individual in Lebanon of arms and related materiel of all types, including weapons and ammunition, military vehicles and equipment, paramilitary equipment, and spare parts for the aforementioned, whether or not originating in their territories; and 15(b) The provision to any entity or individual in Lebanon of any technical training or assistance related to the provision, manufacture, maintenance or use of the items listed in subparagraph (a) above..."

With the reported transfer of Scud ballistic missiles and the training in Syria of Hezbollah troops on the operation and maintenance of these weapons Syria has been caught red-handed and in clear war-provoking violation of UNSCR 1701. The government of Lebanon shares in culpability due to its obvious complicity in the arming and training of Hezbollah's forces due to its failure to control its national territory and borders. This is the most egregious violation of UNSCR 1701 to date, as evidenced by the wholesale re-arming of Hezbollah with even more advanced weapons (such as Syrian-made M-600 rockets and Russian-made Igla-S MANPADS) by Iran, Syria and possibly North Korea during the past 3 years and 7 months, and constitutes a rock-solid casus belli for Israel to immediately begin pre-emptively striking the missiles, and fixed targets related to the weapons transfer and associated training facilities in both Lebanon and Syria. Syrian President Bashar al-Assad bears the lion's share of personal responsibility for provoking the threat of a regional war which could very rapidly escalate to a large-scale exchange of weapons of mass destruction in the Levant.

While rumors continue to circulate in major world capitals that the Syrian's transferred top-of-the line SS-1E Scud-D (50 meter CEP) missiles to Hezbollah, no proof has yet been made public to confirm the rumor. These missiles would give Hezbollah the capability ot act as a proxy for Iran in launching a preemptive or retaliatory strike against Israel's Dimona nuclear complex should Israel strike Iranian nuclear targets in the near term. Sans photographic or human intelligence proof of the Scud variant transferred to Hezbollah, my assessment is that Syria sent the SS-1C Scud-B variant to Hezbollah. Scud-Bs are 1960s-era missiles (obsolete for a modern army), and they would suit Hezbollah better because they're very much a weapon of terror with a 900 meter CEP (Circular Error Probable). Scud-B can carry a thickened VX gas chemical warhead. As with a tossed grenade - close is good enough.

In either case, once Israel confirms Hezbollah's possession of Scud missiles and their operational status vice a malicious ruse of inoperable missile shells, an imminent and series of strategic strikes by Israel would be virtually assured. Should these strikes occur, as I believe they will, then this will likely become a war of widespread WMD use per Isaiah 17:4-11, followed by a rapid escalation into the fulfillment of Psalm 83, Joshua 13:1-7 and Zechariah 9.

Today we should enjoy the calm before the storm, a storm which lies a hair's breadth distance between the current relative calm and full-scale war.

Is the Iran bloc arming for war? - American Thinker (Blog)