After Years of War and Abuse, New Hope for Ancient Babylon

The most immediate threat to preserving the ruins of Babylon, the site of one of the Seven Wonders of the Ancient World, is water soaking the ground and undermining what is left in present-day Iraq of a great city from the time of King Nebuchadnezzar II.

It is also one of the oldest threats. The king himself faced water problems 2,600 years ago. Neglect, reckless reconstruction and wartime looting have also taken their toll in recent times, but archaeologists and experts in the preservation of cultural relics say nothing substantial should be done to correct that until the water problem is brought under control. 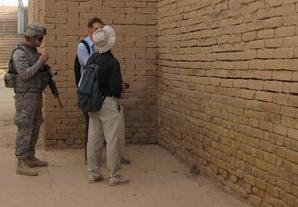 A current study, known as the Future of Babylon project, documents the damage from water mainly associated with the Euphrates River and irrigation systems nearby. The ground is saturated just below the surface at sites of the Ishtar Gate and the long-gone Hanging Gardens, one of the seven wonders. Bricks are crumbling, temples collapsing. The Tower of Babel, long since reduced to rubble, is surrounded by standing water.

Leaders of the international project, describing their findings in interviews and at a meeting last month in New York, said that any plan for reclaiming Babylon as a tourist attraction and a place for archaeological research must include water control as “the highest priority.”

The study, aimed at developing a master plan for the ancient city, was begun last year by the World Monuments Fund in collaboration with Iraq’s State Board of Antiquities and Heritage. A $700,000 grant from the United States Department of State is financing the initial two-year study and preliminary management plan. An official of the monuments fund said the entire effort could last five or six years.

“This is without doubt the most complex program we’ve ever had to organize,” said Bonnie Burnham, the fund’s president.

A few archaeologists have expressed concern about what they said was the project’s slow start. Project members said that they have had serious problems persuading foreign experts to go to Iraq and then clearing them and their instruments for work there.

Besides the wear of time that all ruins of antiquity are prey to, consider the depredations Babylon has suffered in recent history. German archaeologists who made the first careful study of the site, before World War I, recognized the despoiling inroads of irrigation waters drawn from a tributary of the Euphrates River, 50 miles south of modern Baghdad.

McGuire Gibson, a specialist in Mesopotamian archaeology at the University of Chicago, who is not involved in the project, agreed that water is Babylon’s “major problem,” which he said was made worse in recent years when a lake and canal were dug as part of a campaign to lure tourists. Nebuchadnezzar himself, Dr. Gibson noted, dealt with water encroachment by erecting new buildings at ever-higher elevations, on top of mounds of old ruins.

The first German investigators, led by Robert Koldewey, reported finding extensive water damage to mud-brick structures and the intrusion of agricultural fields and villages within boundaries of the original city. People had already carted off bricks and stones, leaving almost nothing of the Ziggurat, known from the historian Herodotus and the Bible as the Tower of Babel. The Germans themselves hauled off the elaborate Ishtar Gate to a museum in Berlin.

Then, in the 1970s and ’80s, President Saddam Hussein of Iraq, casting himself as heir to Nebuchadnezzar’s greatness, had his own imposing palace built at Babylon along the lines of his royal predecessor’s. He even adopted the king’s practice of stamping his own name on the bricks for the reconstruction. Archaeologists were aghast. The new palace and a few other restorations, they say, are hardly authentic, and yet they dominate the site.

What to do with Hussein’s palace is another issue, said the co-director of the project, Jeff Allen. “How to balance integrity of the site with its use as a tourist attraction is the problem,” he explained, noting that Iraq counts on Babylon as a future source of foreign tourist income.

Mr. Allen, an American consultant in cultural preservation who is based in Cairo, said it would cost millions of dollars to demolish the palace or convert it into a visitor center for tourists. “This still has to be studied by other experts,” he said, joking that one suggestion is that the palace would make a perfect casino.

“I’d leave the palace alone,” Dr. Gibson said, pointing out that it was based on sketches left by the German archaeologists.

“So that way, you will walk around in something of what the ancient architecture looked like,” he continued. “Otherwise, you walk around with nothing to see but a bunch of rubble.”

Elizabeth C. Stone, an archaeologist at Stony Brook University in New York who is familiar with Babylon, said she supported efforts to reopen the site to tourists, especially Iraqis themselves. “It’s near Baghdad and is the one site where you used to see Iraqis going to get a sense of their past,” she said.

Further damage was incurred during the Iraq war, started in 2003. Looting was prevalent there and at other archaeological sites. The United States military occupied Babylon for several years, protecting it from plundering but leaving other scars. About one square kilometer of surface soil, some of it with artifacts, “got removed one way or another,” Dr. Stone said.

“The military certainly did not do the place any good,” said Lisa Ackerman, executive vice president of the monuments fund. “They moved a lot of dirt around, but that damage is largely fixable.”

The site was returned to Iraqi control more than a year ago. Ms. Ackerman and Mr. Allen said the project had already surveyed the remains, building by building, and started the restoration of two museums. Although Iraq has a large corps of trained archaeologists, they said, an immediate need is to instruct others in the conservation of ruins and bring in structural engineers and hydrologists to handle the water problem.