The Obama administration has encouraged "resistance" by Palestinians to protest Israel's presence in eastern Jerusalem, a senior Palestinian Authority official claimed to WND.

The senior PA official, speaking from Ramallah on condition of anonymity, said that in recent meetings with U.S. envoys to the region, the American diplomats supported and encouraged the concept of Palestinian protests to pressure Israel into evacuating eastern sections of Jerusalem. 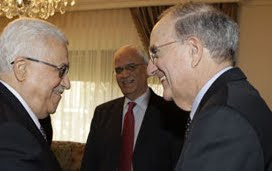 The PA official's claim follows a meeting in Jordan last week between PA President Mahmoud Abbas and George Mitchell, Obama's envoy to the Israeli-Palestinian conflict. At a press conference immediately following the meeting, Abbas declared the Palestinian "right" to "resistance" against Israel.

The U.S. has come down hard on a decision by the Jerusalem municipality to approve 1,600 new homes in Ramat Shlomo, an already-existing Jewish community in eastern Jerusalem. The decision was made public during Vice President Joe Biden's visit to the region earlier this month.

The Palestinians claim eastern Jerusalem as their future capital, while Prime Minister Benjamin Netanyahu has made clear he does not intend to give up the Jewish sections of the city.

Netanyahu has stated that he had not been aware of the decision to build in Ramat Shlomo and that the announcement was not timed to coincide with Biden's visit.

Yesterday, Netanyahu's office made public a U.S. demand for a four-month freeze of Jewish construction in Jewish neighborhoods of eastern Jerusalem. In exchange for the freeze, the U.S. said it would coax Abbas to hold direct negotiations with Netanyahu regarding the establishment of a Palestinian state.

The Palestinians have been engaged in riots and street violence targeting Jews in Jerusalem.

Two weeks ago, Israel rededicated an ancient synagogue in the main Jewish quarter of the Old City. The structure had been badly damaged by Jordanian forces that overran the Jewish Quarter in the 1948 Middle East war.

The Hurva synagogue is hundreds of feet from the Western Wall and is in no way connected to the Temple Mount. Israel did not conduct heavy construction on the synagogue, a structure that had been in the Jewish quarter since the second century.

Still, the PA and Hamas claimed Israel's rededication ceremony was a threat to the al-Aqsa Mosque. Hamas called for a "day of rage," prompting Palestinians throughout eastern Jerusalem to hurl stones at police. There were also reports of rocks and Molotov cocktails aimed at Israeli buses.

PA officials in US for security consultation - Ynetnews