A Christian militia group - called the "Hutaree" - preparing to battle the Antichrist and supposedly targeting Muslims, has been raided by the FBI and Joint Terrorism Task Force, and nine of its members have been arrested. These raids and the alleged Christian character of the militia, as well as its rumored targeting of Muslims, are a mainstream media dream come true - a few years back the BBC featured an improbable inversion-of-reality drama about Christians beheading Muslims, and now, lo and behold, it seems to have come to life. 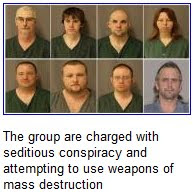 For years now we have heard, in the indelible formulation of Rosie O’Donnell, that “radical Christianity is just as dangerous as radical Islam,” and yet proponents of this exercise in wishful thinking and ignorance have had precious little evidence to adduce in support of it. But now it is certain that for years to come this Hutaree group will be thrown in the face of anyone who takes note of jihad activity in the United States and around the world, as if this group in itself balances and equals the innumerable Islamic groups that are waging armed jihad all around the world today.

The point will be the same as the one Tim McVeigh has had to shoulder alone all these years (even though he wasn’t really a Christian at all and did not justify the Oklahoma City bombing by referring to Christian teaching): that every religion has its “extremists,” and that therefore it would be bad form to subject Islam to greater critical scrutiny, and Muslims to greater law-enforcement scrutiny. Everyone does it, don’t you see? Al-Qaeda, Hamas, Hizballah, Jemaah Islamiyah, al-Shabaab, and on and on and on — yes, but the Hutaree!

Meanwhile, in the Detroit News story on the raids, which as tendentious, superficial, and slanted as all the mainstream media coverage of the Hutaree’s downfall, the Hutaree is matter-of-factly identified as Christian. Yet there are no quotations in the story from Christian leaders explaining how they condemn this “Christian militia,” and saying that Christianity doesn’t condone such violence, and that these militiamen have twisted and hijacked their peaceful faith. Why didn’t the News take care to gather such quotes? After all, they always include such quotes from Muslim leaders in every story about Islamic jihad terror activity. Why is the practice different in this case?

Yet instead of the mainstream moderate Christians (now there’s a phrase we don’t ever see even from the moral-equivalence types) that we would have every reason to expect the Detroit News to feature in this story, the Hamas-linked Council on American-Islamic Relations (CAIR) shows up toward the end of the article, playing the victim card with gusto. The arrests are announced during the tenth anniversary banquet of the group’s Michigan chapter, to “audible gasps” from the assembled crowd. The claiming of victim status, complete with gasping prospective victims, is artful — and of course the Detroit News, true to mainstream media form, says nothing about CAIR’s links to Hamas, the jihad-related arrests and convictions of several of its officials, and the rest of this group’s unsavory record.

A responsible reporter might have asked Dawud Walid, executive director of CAIR-Michigan, if he thought this alleged Christian militia group was a “backlash” after the sharp increase in jihad terror activity in the U.S. in the last year, but why should the Detroit News have responsible reporters on staff when no other mainstream media outlet does?

And as for the FBI and the JTTF, are they investigating the Muslim camps around the country where firearms and paramilitary training are known to be going on? Are they doing so with the same energy and resources that they obviously have devoted to the investigation of this Christian militia? If not, why not? If the allegations against this group are true, they richly deserve to be raided and arrested and shut down. But there have been allegations made against Islamic compounds in the U.S. that are quite similar, and nothing has been done. Why is that?

The Islamic jihad is global, well-financed (courtesy our friend and ally Saudi Arabia) and relentless. One self-proclaimed Christian group should not divert us from the ongoing need to defend ourselves against that jihad. But for many, it will.