Catholics who believe a purifying fire will purge away their sins are deluded victims of a fatal fabrication. The invention of a place for purification of sins called Purgatory is one of the most seductive attractions of the Roman Catholic religion. Pastor John MacArthur of Grace Community Church described this deceptive hoax brilliantly. He said:

"Purgatory is what makes the whole system work. Take out Purgatory and it's a hard sell to be a Catholic. Purgatory is the safety net, when you die, you don't go to hell. You go [to Purgatory] and get things sorted out and finally get to heaven if you've been a good Catholic. In the Catholic system you can never know you're going to heaven. You just keep trying and trying...in a long journey toward perfection. Well, it's pretty discouraging. People in that system are guilt-ridden, fear-ridden and have no knowledge of whether or not they're going to get into the Kingdom. If there's no Purgatory, there's no safety net to catch me and give me some opportunity to get into heaven. It's a second chance, it's another chance after death" (from "The Pope and the Papacy").

The Origin of Purgatory

There was no mention of Purgatory during the first two centuries of the church. However, when Roman Emperor Theodosius (379-395) decreed that Christianity was to be the official religion of the empire, thousands of pagans flooded into the Church and brought their pagan beliefs and traditions with them. One of those ancient pagan beliefs was a place of purification where souls went to make satisfaction for their sins. 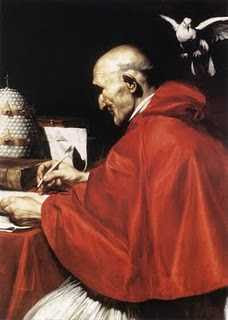 The concept became much more widespread around 600 A.D. due to the fanaticism of Pope Gregory the Great. He developed the doctrine through visions and revelations of a Purgatorial fire. According to the Catholic Encyclopedia (CE), Pope Gregory said Catholics "will expiate their faults by purgatorial flames," and "the pain [is] more intolerable than any one can suffer in this life." Centuries later, at the Council of Florence (1431), it was pronounced an infallible dogma. It was later reaffirmed by the Council of Trent (1564). The dogma is based largely on Catholic tradition from extra-biblical writings and oral history.

"So deep was this belief ingrained in our common humanity that it was accepted by the Jews, and in at least a shadowy way by the pagans, long before the coming of Christianity" (CE).

It seems incomprehensible that Rome would admit to using a pagan tradition for the defense of one of its most esteemed "Christian" doctrines.

The Deception of Purgatory

Purgatory comes from the Latin word “purgare,” which means to make clean or to purify. The Catholic Encyclopedia defines purgatory as "a place or condition of temporal punishment for those who, departing this life in God’s grace, are not entirely free from venial faults, or have not fully paid the satisfaction due to their transgressions." They must be purified of these "venial" sins before they can be allowed into heaven. Here we see Catholicism perpetuating the seductive lie of Satan by declaring "you will not surely die" when you commit venial sins (Gen. 3:4).

The Council of Trent dares to declare that "God does not always remit the whole punishment due to sin together with the guilt. God requires satisfaction and will punish sin...The sinner, failing to do penance in this life, may be punished in another world, and so not be cast off eternally from God." (Session 15, Can. XI).

Those Catholic Bishops had the audacity to declare that the suffering and death of God's perfect man and man's perfect substitute was not sufficient to satisfy divine justice for sin.

The Motivation for Purgatory

Over the centuries billions of dollars have been paid to Roman Catholic priests to obtain relief from imaginary sufferings in Purgatory's fire. The Catholic clergy has always taught that the period of suffering in Purgatory can be shortened by purchasing indulgences and novenas, buying Mass cards and providing gifts of money. When a Catholic dies, money is extracted from mourning loved ones to shorten the deceased's punishment in Purgatory.

When my dear old dad passed away as a devout Catholic of 79 years, I was amazed at the hundreds of Mass cards purchased for him by well-meaning friends. We have heard of other Catholics who have willed their entire estates to their religion so that perpetual masses could be offered for them after they die. It is no wonder that the Catholic religion has become the richest institution in the world. The buying and selling of God's grace has been a very lucrative business for the Vatican.

Another motivation for Rome to fabricate the heretical doctrine of Purgatory is its powerful effect on controlling people. Ultimately, the enslavement and subjugation of people is the goal of every false religion, and Purgatory does exactly that. The concept of a terrifying prison with a purging fire, governed by religious leaders, is a most brilliant invention. It holds people captive, not only in this life but also in the next life. Catholic clergy will not say how many years people have to suffer for their sins or how many Masses must be purchased before they can be released from the flames. This dreadful fear and uncertainty is the most ruthless form of religious bondage and deception!

There is absolutely none! In fact, neither the word nor the concept of sin-purifying fire is found in Scripture. The Vatican was confronted with this in the 16th century when the Reformers protested its practice of buying and selling of God's grace through indulgences. Backed into a corner, the Council of Trent added the apocryphal books to its canon of Scripture. Rome now declares there is scriptural support for purgatory in the apocryphal book of Second Maccabees. The council ignored the fact that the Jewish scribes never recognized the apocryphal books as inspired or part of the Hebrew Scriptures. They were never included because of their many historical, theological and geographical errors. Since God is not the author of error, He obviously did not inspire the writers of the Apocrypha. This is why the Apocrypha was never included in the original canon of 66 books.

The apocryphal verses Rome uses to defend its doctrine of Purgatory refer to Jewish soldiers who died wearing pagan amulets around their necks. Judas Maccabees "sent twelve thousand drachmas of silver to Jerusalem for sacrifice to be offered for the sins of the dead...Judas hoped that these men who died fighting for the cause of God and religion, might find mercy: either because they might be excused from mortal sin by ignorance; or might have repented of their sin, at least at their death. It is therefore a holy and wholesome thought to pray for the dead, that they may be loosed from sins" (2 Maccabees 12:43-46).

Rome argues that since Judas Maccabees prayed for the dead, there must be hope for those who die in sin. This of course, goes directly against God's Word which declares,

"It is appointed for men to die once and after this comes judgment" (Heb. 9:27).

Rome's attempt to give credence to Purgatory by using this ungodly practice of the Jews, who had a history of disobeying God, is pathetic.

In another attempt to find support for Purgatory, many Catholics point to this verse:

Clearly, the context of this verse is the testing of a man's works by fire. The works that survive are the ones done for the glory of Christ and are called gold, silver and precious stones (Eph. 2:10). All the other superfluous works are burned in fire and are called wood, hay and stubble. It is not man's sins that are being purged, it is man's spurious works that are being burned and destroyed.

The Biblical Rebuke of Purgatory

God's Word leaves absolutely no possibility for sin to be purged away by anything other than the blood of Jesus Christ. The beloved apostle John penned these words with irrefutable clarity. He wrote,

John did not say "some" sins or "most" sins, but all sin! This soundly rebukes the need for a sin-purging fire. God's Word also declares, "All things are cleansed with blood, and without shedding of blood there is no forgiveness" (Heb. 9:22). When Jesus "made purification of sins, He sat down at the right hand of the Majesty on high" (Heb. 1:3). Those who desire to have their sins purged need to trust a person, not a place. The blood of Christ is the only cleansing agent for sin! Those who come to the cross of Christ must come with empty hands of faith, bringing nothing but their sins.

Every blood-bought believer is instantly present with their Redeemer at the moment of death. To be "absent from the body" is to be "at home with the Lord" (2 Cor. 5:6-8). This good news was affirmed by the Lord Jesus with the promise He gave to the repentant thief at Calvary. He said to him, "Truly I say to you, today you shall be with Me in Paradise" (Luke 23:43). This habitual sinner did not need a fire to purge his sins.

Catholics who believe in Purgatory need to be asked: "Who is in charge of releasing souls from the purging fire?" It cannot be God because of His promise to believers.

After conversion, God no longer counts sins against His children (2 Cor. 5:19).

Purgatory is a travesty on the justice of God and a disgraceful fabrication that robs Christ Jesus of His glory and honor. He alone satisfied divine justice, once and for all, by the perfect and finished sacrifice of Himself. The fatal deception of Purgatory blinds Catholics from the glorious Gospel of grace. It is one of Satan's many lies which keep his captives from knowing and trusting the sufficiency of Jesus Christ. It is Christ alone that will present us "faultless before the presence of his glory" (Jude 24).

Why Did the Messiah Have to Die? - Ariel Ministries (Arnold Fruchtenbaum)

The Apocrypha - Let Us Reason Ministries

The Pope and the Papacy - Grace to You (John MacArthur)

What does the Bible say about Purgatory? - GotQuestions.org