President Obama announced on Tuesday that the United States would not be developing new nuclear weapons, nor would the USA shoot any nuclear weapons against non-nuclear states abiding by the nuclear Non-Proliferation Treaty (NPT), even if America were attacked with chemical or biological weapons. In the meanwhile, the United Nations Secretary-General Ban Ki-moon visited a former Soviet nuclear testing site and declared that he would make use of the nuclear summit in Washington next week to try to get all the world's nuclear powers to destroy these weapons altogether.

UN Secretary General Ban Ki-moon flew by helicopter to the former nuclear test site Semipalatinsk in Kazakhstan on Tuesday. Kazakhstan's government shut down the site in 1991 and removed more than 100 nuclear warheads, but 1.5 million people still suffer the effects of nuclear radiation poisoning from the hundreds of nuclear explosions carried out there, both underground and above it, during the 40 years from 1949 to 1989. Ban hopes that the entire world will become nuke-free. 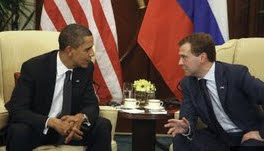 President Obama is scheduled to meet with Russian President Dmitry Medvedev in Prague on April 8 to sign a new agreement to mutually reduce the nuclear arms of both countries. The treaty is a follow up to the 1991 Strategic Arms Reduction Treaty (START I), which expired in December. If ratified, the new treaty would reduce the operationally deployed nuclear warheads of each country down to 1,550. The Russia parliament is ready to ratify the treaty, but there is uncertainty about how it will fare in the Senate, especially if the process drags beyond the November elections.

Next week, representatives from 47 countries will gather in Washington DC to discuss the "loose nuke" problem and work out ways to track down all missing nuclear material that terrorists might use to make nuclear weapons. The majority of the countries attending the Nuclear Security Summit do not themselves have nuclear weapons, but President Obama plans to talk one-on-one with the heads of those countries that do.

Israeli Prime Minister Benjamin Netanyahu will also be attending the meeting, but will not meet with Obama. A little more than two weeks ago the two leaders bumped heads over Israel's plan to build 1600 new housing units in East Jerusalem.

Last year in the Czech Republic, President Obama set out his "road to zero" aspirations to rid the world of nuclear weapons, and certainly it would be nice if no country could threaten another with the horror of a nuclear attack. Unfortunately, America's enemies may only be encouraged by the USA's willingness to get rid of its nuclear power, decreasing its effectiveness as a credible deterrent to attack. While Russia may be willing to watch the United States reduce its mighty arsenal to the level of Russia's mediocre one, Iran's eager nuclear ambitions continue to threaten the safety of not only Iran's enemies, but of the whole world.