Defaults now beginning to occur in a number of European cities prefigure what may end up being the largest financial bubble ever to burst – a bubble that today amounts to more than $600 trillion. 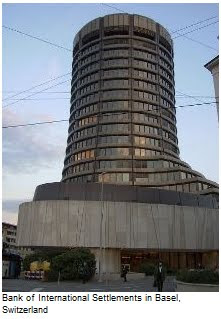 The Bank of International Settlements in Basel, Switzerland, now estimates derivatives – the complex bets financial institutions and sophisticated institutional investors make with one another on everything from commodities options to credit swaps – topped $604 trillion worldwide at the end of June 2009.

To comprehend the relative magnitude of derivative contracts globally, the CIA Factbook estimates the 2009 Gross Domestic Product, or GDP, of the world was just under $60 trillion.

The small 800-year-old town of Saint-Etienne in France has just defaulted on a $1.6 million contract owed to Deutsche Bank. The city entered into a complex currency swap arrangement to reduce the cost of borrowing some $30 million.

To cancel all 10 derivative contracts Saint-Etienne currently holds would cost the town approximately $135 million, more than six times the amount initially borrowed, largely because no bank or institutional investor would want to purchase contracts that are now on the losing side of the bet.

Saint-Etienne is only one of thousands of EU municipalities that bought into derivative contracts as a way to cut the costs of municipal borrowing.

A key problem with derivatives is that in the attempt to reduce costs or prevent losses, institutional investors typically accepted complex risks that carried little-understood liabilities widely disproportionate to the any potential savings the derivatives contract may have initially obtained.

The hedge fund and derivatives markets are so highly complex and technical that even many top economists and investment banking professionals don't fully understand them.

Moreover, both the hedge fund and derivatives markets are almost totally unregulated, either by the U.S. government or by any other government worldwide.

But losses on derivatives are not limited to government entities.

Obama administration economic guru Larry Summers may end up being best remembered for having destroyed almost single-handedly the Harvard University endowment fund as a result of misguided instructions he gave the fund's management during his tenure as Harvard University president from 2002 to 2006.

Summers, currently director of the White House National Economic Council, called for an aggressive investment strategy in which Harvard' endowment fund engaged in risky strategies, including derivative strategies that have burdened the nation' largest university endowment with billions of dollars in toxic assets.

As a result, the Harvard endowment, which peaked at $36.9 billion in June 2008, has since lost some 30 percent of its value, dropping to $26 billion, according to Bloomberg News.

In October 2009, Harvard University paid $497.6 million to investment banks to get out from $1.1 billion in interest rate swaps that were intended to hedge variable-rate debt for capital projects, Bloomberg reported.

In what amounted to Harvard's biggest endowment loss in 40 years, the university also agreed to pay $425 million over the next 30 to 40 years to offset an additional $764 million in credit-swap deals gone bad.

Citing failed interest rate swaps that forced Harvard to pay banks $1 billion just to terminate the junk contracts, Bloomberg reported the Harvard endowment's investments have become so toxic that even Summers won't explain what happened during his watch.

The Boston Globe squarely put the blame on Summers' doorstep, noting he came into office with a bold vision to expand the size of its science facilities by more than a third.

"Summers told the faculty not to think small," the Globe wrote. "Its ambitions were limited only by its imagination, he said. "Harvard could always come up with more money from its 'deeply loyal fans.'"

Unfortunately, deeply loyal fans and alumni with deep pockets were not enough to bail the university out from Sumner's ill advised investment advice.

The damage done to Harvard is not limited to plans to expand the science facility into blue-collar Allston. Now, the university is faced with slashing faculty and staff.

Last year, more than 1,600 of Harvard's staff were offered early retirement, and more than 500 accepted.

"Loyal alumni have contributed generously to staunch the bleeding," the Globe wrote, "but huge deficits remain in spite of all the reductions. Harvard will be a smaller place when the dust settles, with less educational and scholarly reach. It will employ fewer people and will contribute less to local and national prosperity."

While the hedge fund market is small in comparison to derivatives, hedge funds in the U.S. are still a $1.5 trillion industry.

Hedge funds and derivatives share a common characteristic in that both were set up initially by professional investment advisers to assist them in managing the risk contained in institutional investment portfolios, including mutual fund assets or pension funds that typically involved hundreds of millions of dollars.

One of the original ideas behind derivatives was the realization that professional money managers, including those in banks, investment companies and hedge funds, needed to make bets to offset the possibility of taking losses.

The idea was to use derivative bets on interest rates to "hedge" or balance off the risks taken on interest-rate investments owned in the underlying portfolio.

If an institutional investment manager held $100 million in fixed-rate bonds, for example, to hedge the risk, should interest rates rise or fall in a manner different than projections, a purchase of a $100 million variable interest rate derivative could be constructed to cover the risk.

Whichever way interest rates went, one side to the swap might win and the other might lose.

The money manager losing the bet could expect to get paid on the derivative to compensate for some or all of the losses.

In the strong stock and mortgage markets experienced beginning in the historically low 1-percent interest rate environments of 2003 through 2004, the number of hedge funds soared, just as the volume of derivative contracts soared from a mere $300 trillion in 2005 to the more than $600 trillion today.

Bloomberg reported the number of hedge funds tripled in the last decade to a record of 10,233 at the end of June 2008, according to the Chicago-based Hedge Fund Research Inc.

More than one-third of those funds could be "wiped out" in the economic downturn that began in December 2008, Bloomberg said.

The Bank of International Settlements, or BIS, in Basel, Switzerland, makes no estimate of how much of the $604 trillion in outstanding derivative contracts are today vulnerable to collapse.

Losses in derivatives played a major role in the bankruptcies of both AIG and Bear Stearns.