As troubling as China’s growing economic power over the United States is – the leverage it has over policy because of the credit it extends to us – its monopoly on rare earth elements may be even more so.

China accounts for 97% of global production of “rare earth” elements - lanthanum, cerium, neodymium, europium and yttrium - which are vital for a wide range of technologies like iPhones, wind turbines and X-ray machines and military applications like precision-guided munitions and lasers. If it chose to cut off our supplies of these elements, our ability to produce many of these weapon systems and widely used civilian technologies would end abruptly.

In 1997, Deng Xiaoping, then China’s Communist Party leader, observed that the Mideast may have oil, but China had rare earth elements. With a virtual monopoly of the critical materials, China could control the rare earth market much as the Organization of the Petroleum Exporting Countries controls oil.

During the 1990s, China put rare earth competitors out of business by flooding the market with cheap materials which led to the closure of America’s only rare earth mine. Some American businesses that relied on rare earth materials moved to China to remain competitive. Now China has switched tactics to maintain its monopoly.

Last year Beijing announced radical cuts in rare earth exports - down to 25% from 75% - which will accomplish two things. It will drive up the costs of all high-tech products which include rare earth materials thus giving China’s high-tech industries a significant competitive advantage and force foreign competitors to move their high-tech factories and research centers to China to circumvent quotas.

Last week, the U.S. Government Accountability Office (GAO) exposed China’s rare earth monopoly, the stark facts about America’s dangerous dependence on China for rare earth elements, and the bleak forecast to fix the problem. The GAO report indicates the U.S. produced no rare earth elements in 2009 and it could take up to 15 years to rebuild our rare earth supply chain.

Rep. Mike Coffman (R-Colo.) is understandably alarmed by this bleak assessment. “We need to move aggressively on this issue now before it’s too late,” Coffman said in an interview on Bloomberg Television. But it is already too late to prevent the problem from getting worse.

“Time is of the essence because the situation is going to get worse” as China’s domestic consumption of the material rises, said Dan Slane, chairman of the Washington-based U.S.-China Economic and Security Review Commission. Slane says fixing the problem will require “enormous investment and time.” But he warns few capitalists will invest in rare earth mines and processing facilities because there’s a good chance China will retaliate.

Yoichi Sato, head of the rare earth division of Mitsui, one of Japan’s largest corporate conglomerates, said China will use its existing monopoly to crush any competition that emerges. “If new projects emerge, as they have recently in Malaysia and Australia, China just drops its prices and forces rivals out of business,” Sato said.

China aggressively buys out potential competition as well. Last year, two Australian mines, with a combined potential production equal to a quarter of global output of rare earth materials, were expected to open. But they lost their financing and Chinese government-owned mining companies bought a controlling share of one and a quarter of the other. 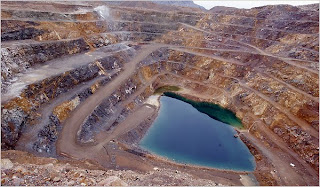 In 2005, China National Offshore Oil Corporation tried to buy America’s only rare earth mine at Mountain Pass, Calif., but lost out to Chevron. Chinese buyers tried to persuade Chevron to sell the mine in 2007 but Chevron sold it to Molycorp Minerals LLC, a private American group.

Mountain Pass closed in 1998 due to regulatory problems with wastewater and Chinese competition but reopened in 2007. But the mine won’t begin producing four of the 17 rare earth elements until 2012 at the earliest.

China controls more than a third of the world’s known rare earth reserves and the U.S. has 13%. Deposits are also found in Australia, Greenland and Canada but these countries produced no material last year. In 2009, India, which was second to China in rare earth ore production, produced 2,700 tons compared to China’s whopping 120,000 tons.

It would be helpful to find substitutes for rare earth elements but that won’t be easy. The GAO indicates the rare earth materials used in defense systems “are responsible for the functionality of the component and would be difficult to replace without losing performance.” For example, “fin actuators used in precision-guided munitions are specifically designed around the capabilities of neodymium iron boron rare earth magnets.” Besides, we will continue to use these materials in the future based on their life cycles for equipment like Lockheed Martin’s Aegis SPY-1 radar, which uses rare earth element samarium cobalt magnet components.

The GAO report provides a short list of defense systems that include rare earth material such as communication systems, avionics and satellites. Even off-the-shelf products in defense systems include rare earth materials, such as computer hard drives. Subcontractors rely on the materials to produce items like electric motors to drive ships and the reference and navigation system in the M1A2 Abrams tank.

So what should America do to reduce its dangerous dependence on the monopolistic Communist Chinese?

First, the Mountain Pass facility must be quickly returned to full production. But that facility lacks the manufacturing assets and facilities to process rare earth ore into finished components, such as permanent magnets.

The federal government should provide Molycorp Minerals LLC, the Mountain Pass owner, help in overcoming regulatory issues, raising capital and protecting it from Chinese government market manipulation. The company should also be encouraged to produce finished components rather than force American businesses to rely on Chinese factories.

Second, Mountain Pass does not have substantial amounts of heavy rare earth elements such as dysprosium, which is used for heat-resistance qualities of permanent magnets in defense systems. That’s why other U.S. rare earth sites such as those in Idaho and Montana must be developed, which the GAO admits could take 7 to 15 years to bring fully online. We should also work with allies like Canada and Australia to develop their mines.

Third, processing facilities may require new technologies, permissions to use existing technology patents and environmental solutions. Government must work with private industry to overcome these challenges.

Industry officials told the GAO it would take two to five years to develop a pilot processing plant but they won’t start production without a consistent source of oxides from outside of China. Then government must work with the processing plant operators to harness the best technologies – some which require cooperation from international patent owners – and to satisfy the environmental concerns while expeditiously moving forward.

Finally, rare earth materials are so important to our high-tech way of life that tough economic sanctions and tariffs against China are warranted to compel Beijing to cooperate.

The U.S. and the European Union called on the World Trade Organization to intervene in China’s export restrictions on vital rare earth metals. China called the complaint “ridiculous and unacceptable” and refused to reduce export tariffs and raise quotas. That’s why the U.S. should respond with in-kind economic sanctions until China lifts restrictions.

This crisis won’t correct itself through market forces alone and the Rare Earth Wars could become a reality. This is an excellent example of the rare occasion in which, for national defense and economic security reasons, the U.S. government must step-in to help private industry. Rebuilding our rare earth supply system and protecting private industry from Beijing’s abusive trade policies must be a national priority.

Molycorp plans IPO that could raise up to $350M - BusinessWeek