Israeli leaders marked the occasion by warning Iran not to mess with them. Admiral Mullen, chairman of the U.S. Joint Chiefs of Staff, said the Pentagon is actively planning for a possible war with Iran, though he accurately noted that this is a last resort option and would have to be approved by President Obama. At the same time, the New York Times reports that a secret memo by Defense Secretary Robert Gates indicates that the U.S. does not have a clear, coherent, decisive strategy to stop Iran from getting nuclear weapons. That certainly seems to be the case, and I have seen no indication that this President would ever use force to stop Iran. Indeed, many in the U.S. government don’t seem to understand the End Times theology that is driving Iranian leaders to feel they need to launch a nuclear war against the U.S. and Israel to accelerate the return of their so-called Islamic messiah known as the Twelfth Imam. 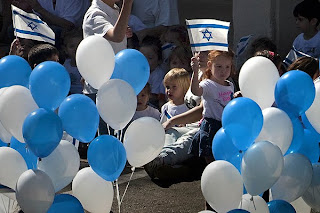 This is going to be a very challenging year for Israel. As the U.S. administration continues to purposefully denigrate Israel and distance itself from Jerusalem, rumors of a coming major regional war are growing. Jordan’s King Abdullah warns a war could break out by this summer. The Russians are planning to turn on Iran’s nuclear reactor at Bushehr (near the Persian Gulf), which means Israel would have to strike sooner than August if it plans to hit the reactor before it goes hot.

Ahmadinejad Struts His Stuff in the Nuclear Showdown - TIME